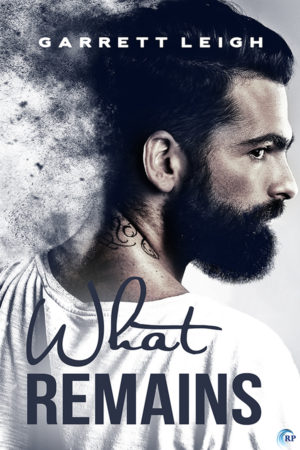 What Remains
Author: Garrett Leigh
Reviewer: B.
Rating: A

The only thing vibrant, independent Jodi Peters wanted from his rare evening out was to have a little fun, then go back home to his comfortable no-strings life. He never expected the captivating bouncer who tossed a small herd of drunken idiots out of a bar to walk him home. Of course, inviting the man inside certainly hadn’t been on his to-do list for the evening, either, but he wasn’t about to let the strongest attraction he’d ever felt slip away.

Recently divorced and newly out, Rupert O’Neil doesn’t exactly have his life in order when he meets the hipster-scruffed, not-entirely-sober web designer outside the bar where he works on the weekends. Fighting fires is everything he wants in a day job, but it isn’t enough to keep a decent roof over his head and support the daughter he adores, especially when his ex-wife is set on making him as miserable as possible. But, as flirtation with a stranger turns into love, his world becomes as close to perfect as he ever could have hoped for—and far too good to last.

Although I was only introduced to her writing recently, Ms. Leigh has quickly become a new favorite. I’ve enjoyed everything I’ve read by her so far, even though each of those stories has broken my heart a little. Which, admittedly, is part of the draw. Not content to have her characters “merely” struggling to find love, they must fight unfavorable odds to keep it when the world seems intent on wrenching it away. Fortunately, the scale is tipped towards the hopeful side of the equation just enough in What Remains, and it works.

Unlike many other stories I’ve read (irrespective of genre), I liked both main characters in What Remains equally well. Jodi and Rupert are each wonderful in very different ways. Jodi is the more open of the pair, always quick with a joke, and unabashedly determined when it comes to loving Rupert. Rupert, by contrast, is quieter—mostly, I imagine, from the responsibilities he shoulders all the time. He’s more practical and uncertain, yet he’s no less resolute in his devotion to Jodi. Jodi almost shines too brightly compared to Rupert’s more reserved demeanor, but, the combination of personalities is actually perfect.

What Remains is also one of those stories that needs to be experienced and shouldn’t be reduced to a few perfunctory statements. Jodi and Rupert’s journey is a painful and difficult one, but it’s beautiful regardless. Ms. Leigh poses a wealth of intriguing questions that would be excruciating if I had to face them myself, and redefines universal concepts such as hope, faith, and even love.

Despite the strong, and sometimes dark, emotions that are central to much of the narrative, What Remains makes great use of humor, as well. Jodi is funny—twisted and funny—but hilarious all the same. Rupert made me laugh just as much, however, his bewildered longing and acceptance of the man he loves sweetly evident throughout the novel. It’s a good balance all around, and a reminder of things that oughtn’t be taken for granted.

Once again, Ms. Leigh has written an evocative, complex tale of loss and new beginnings that captured my heart and mind from the beginning. Never easy or uncomplicated, this simply, yet aptly titled standalone is sometimes messy and painful, but in the very best ways possible. Rupert and Jodi are unique and thoroughly endearing characters, and I was surprised by just how invested I became in their story. Overall, I found What Remains to be an unflinching, but extremely rewarding look at what happens when things fall apart and the heart remembers what the mind cannot.

Web designer Jodi Peters is a solitary creature. Lunch twice a week with his ex-girlfriend-turned-BFF and the occasional messy venture to a dodgy gay bar is all the company he needs, right?

Then one night he stumbles across newly divorced firefighter Rupert O’Neil. Rupert is lost and lonely, but just about the sweetest bloke Jodi has ever known. Add in the heady current between them, and Jodi can’t help falling hard in love. He offers Rupert a home within the walls of his cosy Tottenham flat—a sanctuary to nurture their own brand of family—and for four blissful years, life is never sweeter.

Until a cruel twist of fate snatches it all away. A moment of distraction leaves Jodi fighting for a life he can’t remember and shatters Rupert’s heart. Jodi doesn’t know him—or want to. With little left of the man he adores, Rupert must cling to what remains of his shaky faith and pray that Jodi can learn to love him again.

To celebrate the release of What Remains, Garrett is giving away $25 in Riptide Publishing credit. Leave a comment with your contact info to enter the contest. Entries close at midnight, Eastern time, on July 9, 2016. Contest is NOT restricted to U.S. entries. Thanks for following the tour, and don’t forget to leave your contact info! This contest is sponsored by the author, and the prize will be delivered by the contest sponsor. This blog, its reviewers, and the owner are not responsible for items lost in the mail. By entering this giveaway, participants agree to abide by these terms.

8 responses to “Review + Giveaway: What Remains by Garrett Leigh”