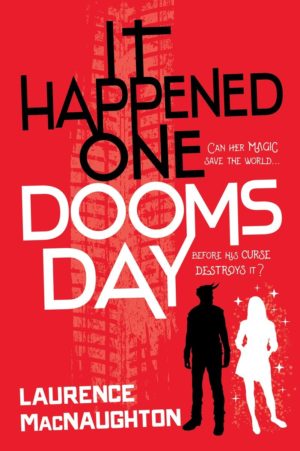 It Happened One Doomsday is a quirky little read. It has sort of a campy feel to it.  Clearly this is the first in a new series and I will likely read at least the next installment when it comes out.  It’s not an outstanding first book, the writing flips between excellent description and repetitive metaphors, but it did get me to suspend my disbelief—which is no small task in contemporary fantasy.  I laughed when the main character Dru acknowledged that fact saying, “I can’t expect Nate to understand magic.  Hardly anyone believes in it, outside of actual sorcerers.”  The author has to make me believe his story is plausible and having been born in Berkeley, California, a store that sells crystals for healing and magical powers is entirely realistic.  A simple internet search will yield thousands of hits.  I allowed MacNaughton to build in my mind from that set-up.

There isn’t a great deal of character development because it’s so action forward, but MacNaughton did succeed in creating sincere characters, especially Dru.  She was entirely genuine and charmingly unaware of her own talents.  Dru is also innately charitable, unable to help herself from helping others.  It’s a pleasant change in a main character.  She shares an unexpected bond with a mechanic, Greyson, who is turning into a demon because of his cursed car.  I hope we still like him when the next book comes out. The most badass character, even surrounded by demons, is a woman, Dru’s best friend Rane.  She was unwaveringly loyal, but so far one dimensional.

Toss it in your pool bag, it’s a good single afternoon read for the summer.

Magic is real. Only a handful of natural-born sorcerers can wield its arcane power against demons, foul creatures, and the forces of darkness. These protectors of the powerless are descendants of an elite order. The best magic-users in the world.

Unfortunately, Dru isn’t one of them.

Sure, she’s got a smidge of magical potential. She can use crystals to see enchantments or brew up an occasional potion. And she can research practically anything in the library of dusty leather-bound tomes she keeps stacked in the back of her little store. There, sandwiched between a pawn shop and a 24-hour liquor mart, she sells enough crystals, incense, and magic charms to scrape by. But everything changes the day a handsome mechanic pulls up in a possessed black muscle car, his eyes glowing red.

Just being near Greyson raises Dru’s magical powers to dizzying heights. But he’s been cursed to transform into a demonic creature that could bring about the end of the world.

Then she discovers that the Harbingers, seven fallen sorcerers, want to wipe the planet clean of humans and install themselves as new lords of an unfettered magical realm. And when they unearth the Apocalypse Scroll, the possibility of a fiery cosmic do-over suddenly becomes very real.

There’s only one chance to break Greyson’s curse and save the world from a fiery Doomsday – and it’s about to fall into Dru’s magically inexperienced hands….

3 responses to “Review: It Happened One Doomsday by Laurence MacNaughton”