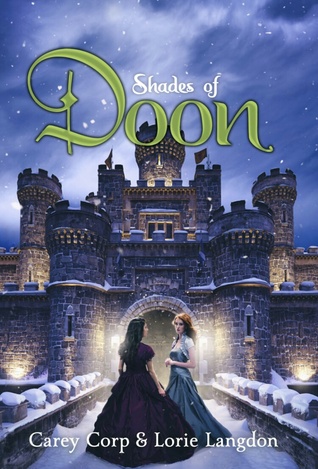 After reading the first two books in this series, I was beyond excited to receive Shades of Doon as an ARC in the mail. However, I am sad to say I was disappointed as I started reading the book and even had to put it down for a while before picking it up again.

Shades of Doon picks up beautifully from where the second one, Destined For Doon, leaves off; however, as the book goes on it feels as though the authors weren’t sure where they were going with it. I often found myself thinking that I was simply re-reading the second book.

I also found myself annoyed with the turn the book took in its age range. I felt like it went from a Teen/ YA book to something intended for pre-teens. Maybe the authors did that intentionally to expand the group of readers for the series, but I found it annoying and even frustrating. The book is marked as young adult, and at times I would agree, but at others I felt more like I was reading a book meant for preteens. The character’s voices changed so much, the language used became immature in places and topics it would dive into and then quickly avoid was annoying, and left a variety of issues unresolved. This felt out of character based on the previous two novels. Regardless of why this happened, I’m sad to say by the end of this novel, I was not excited for the fourth and final in the series.

After cheating death, Veronica Welling is determined to savor every moment in her idyllic kingdom with both her true love and best friend by her side at last. At the same time, Mackenna Reid is enthusiastically building her new life and a theater with her prince. But just as their dreams of happiness are within reach, the world Vee and Kenna have chosen is ripped away, leaving them to face their most horrific challenge yet—their old lives.

Thrust out of Doon, the best friends are confronted with tormentors from their past and no way to return to their adopted land. When the MacCrae brothers rush to their rescue, the girls’ situation turns from nightmare to modern-day fairy tale. But their happiness could be short lived: unbeknownst to them, someone in their closest circle is aiding the witch of Doon in her bid to destroy the kingdom once and for all.

One response to “Review: Shades of Doon by Carey Corp and Lorie Langdon”