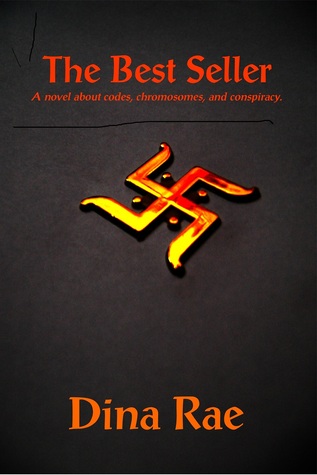 The Best Seller is a solid foundation to an as yet unnamed new science fiction series by Dina Rae.  With the flood of paranormal romance in the last decade, it’s been a long time since I’ve read a book about plain, old fashioned aliens.  We’re talking little green men with big eyes, flying saucers, and government conspiracy. It’s retro in a good way. There’s even a nod to the History Channel’s Ancient Aliens.  (Come on, you know you watch it and rant about the amount of product Giorgio Tsoukalos puts in his hair. I bet you even know how to correctly pronounce “Tsoukalos.”)  It’s the guilty pleasure that makes you feel less stupid than watching the Kardashians.

The story begins in 1947 with the infamous Roswell incident and as that blossoms into a fully funded military operation, it flips back and forth with the present day.  In the modern portion of the story, Maya Smock writes a best seller, but unknown to her, a code is embedded in the text with ties back to the Roswell aliens. I love that Rae has included the concept of a deliberate construction within Maya’s book.  It was the construction I loved most about Ella Minnow Pea by Mark Dunn and The Time Traveler’s Wife by Audrey Niffenegger. As Maya skyrockets into literary stardom with the likes of Arthur C. Clark, Issac Asimov, and Ray Bradbury, she comes under the wing of another best-selling author, Jay McCallister who claims to have the same code embedded in his books.

The only character I didn’t like was Claude.  It’s easy to say that’s because he’s the “bad guy,” but that’s all he is.  He comes across as one-dimensional, a little too obvious and a little too easy to hate.  Jay McCallister was my favorite character and we barely got to know him.  I’m hoping as Maya moves into new and unexpected territory that we’ll get to know him in new ways through her and her new friends.

1947 is post World War ll and some of Germany’s genetic scientists have ended up not as war criminals, but working for the military out in Roswell Nevada.  If anyone remembers the swastika which flashed briefly as part of Professor Langdon‘s lecture on symbols at the beginning of the Da Vinci Code movie, you’ll remember it was one that the Nazi party appropriated, but existed long before that association.

The word swastika comes from the Sanskrit svastika, which means “good fortune” or “well-being.” The motif (a hooked cross) appears to have first been used in Neolithic Eurasia, perhaps representing the movement of the sun through the sky. Is it so unusual then that aliens who come from the sky might have introduced this motif to the earth’s early population or that Hitler, in appropriating it, had broader goals for his genetic experimentation?  So many interesting questions, even if they are fictional, to explore.

The writing in Dina Rae’s The Best Seller is not campy in the way The X-Files could be at times.  It acknowledges where we are today in our culture with regard to UFO’s, but I felt like I was twelve again and reading Bradbury’s S is for Space. As a modern reader, I wanted a little more of the science.  Then again, I liked Andy Weir’s The Martian.  Readers who don’t enjoy the technical stuff won’t be put off by what is there. I’m looking forward to the next installment.

When Maya Smock writes her first novel, everything seems to go her way. Her book practically writes itself. She marries her gorgeous agent. Her name is on all of the best seller lists. Billionaire author Jay McCallister takes an interest in her meteoric rise to fame and invites her into his world of alien-believing celebrities. Her life changes forever when he tells her that they were both created inside of a laboratory. These authors are embedding an alien genetic code within the pages of their novels that originated from Nazi Germany because…

The time has come. They are here.

2 responses to “Review: The Best Seller by Dina Rae”