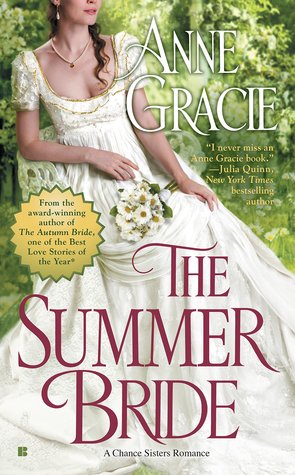 I have loved the Chance Sisters series since I read The Autumn Bride in 2013, but of all the sisters, Daisy has always been my favorite. Her spunky candor, hard-working nature, tender heart, and lioness-like protectiveness of those she loves won me over the moment I met her. The Summer Bride did not disappoint in my memories of Daisy or in my getting to know Finn, who was able to meet Miss Daisy tit-for-tat and balanced her humor while teaching her that trust is not always misplaced and it’s never a mistake to love someone.

I thoroughly enjoyed Finn and Daisy’s chemistry, banter, and watching them both learn that often times what is need most is what we are most scared of. I also really enjoyed watching Finn work for Daisy and watching Daisy’s annoyance at being courted all while slowly realizing that their friendship has laid a firm foundation for an amazing and safe love. I love that Finn supported and waited for Daisy as she learned the lessons she needed to so that she could commit completely to their relationship, all while letting her think she was running the show. Because he knew she needed that control, even if he didn’t entirely understand why.

I really loved Finn as a whole. He may have been raised poor, but he had the heart of a gentleman and went out of his way to protect anyone under his care, real or perceived, much like Daisy, which is one the reasons they suit one another so well.

As usual Ms. Gracie gave us the perfect overview of the other sister’s stories so if someone picked up Daisy’s story and wasn’t familiar with the other girls they’d still be ok. She also continued to give us secondary characters that were well-written and added fun color to the story without diverting attention from Daisy and Finn. In some cases, those characters gave us even better insights into who Daisy and Finn are and why. Lady Beatrice continued to be the perfect balance of friend and protector, and the end of the novel made me tear up. It really was the perfect ending to this series.

Overall, if you love the other Chance Sisters titles you certainly won’t want to miss Daisy, and if you aren’t familiar with the sisters I think you’ll still really love her. The Summer Bride makes for a great poolside, porch swing, or hammock read while you enjoy what summer has to offer.

Fiercely independent Daisy Chance has a dream—and it doesn’t involve marriage or babies (or being under any man’s thumb). Raised in poverty, she has a passion—and a talent—for making beautiful clothes. Daisy aims to become the finest dressmaker in London.

Dashing Irishman Patrick Flynn is wealthy and ambitious, and has entered society to find an aristocratic bride. Instead, he finds himself growing increasingly attracted to the headstrong, clever and outspoken Daisy. She’s wrong in every way—except the way she sets his heart racing.

However, when Flynn proposes marriage, Daisy refuses. She won’t give up her hard-won independence. Besides, she doesn’t want to join the fine ladies of society—she wants to dress them. She might, however, consider becoming Flynn’s secret mistress…

But Flynn wants a wife, not a mistress, and when Flynn sets his heart on something, nothing can stand in his way…

One response to “Review: The Summer Bride by Anne Gracie”