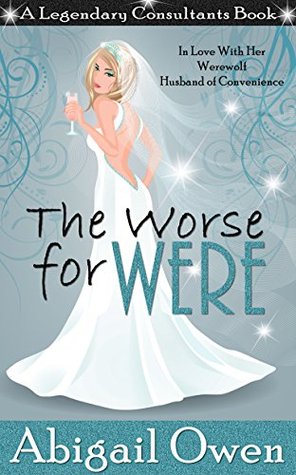 The Worse for Were
Author: Abigail Owen
Reviewers: Gikany and Una
Rating: B-

The Worse for Were is the second novella in the Legendary Consultants series.  We regretfully did not read the previous novella, but were able to pick up this world quickly enough.  Even though we thought that Ms. Owen’s Shadowcat Nation series has a tighter and stronger mythology, we enjoyed this more casual approach to paranormal romance.

Although The Worse for Were focuses on werewolf shifters, the mythology includes nymphs, gods, demigods, and fae.  We are not sure if there is more background information in the previous novel, but we thought that there might be some world building we may have missed.  We were able to fall into the world, although there were a couple of off-notes in the mythology that Gikany and Una were able to debate. We were distracted by the indiscriminate use of the word alpha. For us Alpha is a title while dominant denotes a demeanor or personality of the shifter.

With the journey of two Alphas marrying for convenience, a prophecy, and the numerous paranormals in the mix, there was so much potential.  The personalities of Tala and Marrok, their banter and mating urge were wittily and passionately executed.  We understand that given the nature of a novella, there can only be so much background and plot weaving done.  However there is so much potential in this story we wished it had been made into a full novel.  The blending of Tala and Marrok’s packs (unless there is more to come) could have been far more complicated and intricate.  Knowing what Ms. Owen is capable of in her other series, we just wanted more.  Since this story is a novella, we can understand some of the jumps and skips.

Overall, Gikany and Una liked this novella, although we thought it was noticeable that we jumped into the series.  We recommend that you read this series from the beginning.  We also thought that there was enough in the world and the plot for a fully fleshed out novel.  We are interested in reading the next story in this series.

Our Rating:  B- Liked It, but we had a couple small issues

The Canis and Banes packs of werewolves have been feuding for centuries. The Hatfields and McCoys were a tea party in comparison. Until Marrok Banes, the Alpha of his pack, decides to end the fighting with a marriage of convenience. Never mind that he can’t keep his hands off his gorgeous new mate.

Tala Canis is the new Alpha of the Canis clan, the first female to claim that right, a position hard fought and won. For the sake of her people she agrees to wed Marrok. Never mind that the Alpha, once her enemy, makes her body flash heat with a single look.

But after the mating ceremony, Marrok only seems interested in one thing…taking over their combined pack while leaving Tala out of the loop. If her Alpha mate can’t learn to share, then it’s time to show him exactly why she’s an Alpha herself.

5 responses to “Review: The Worse for Were by Abigail Owen”