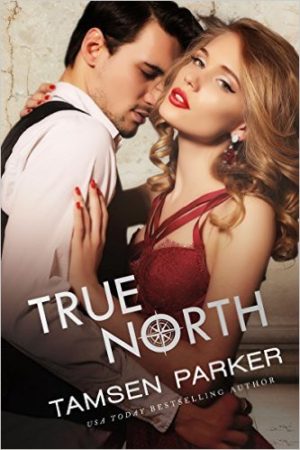 Let’s be honest here. I was worried when I started reading True North. I don’t have many triggers—at least ones that will make me drop a book like a piece of pottery fresh from firing. I considered it with this title. I’m SUPER glad I didn’t. Here’s your trigger warning, people: there’s berating going on in here. It’s all handled extremely well, and that’s pretty much all I’m going to say about that. Truth? I trusted Ms. Parker to make sure Rey had a handle on that stuff. He totally had it on-lock. You may now jump up and down because Rey is in True North. Readers of the series will be on-board with me.

At the end of the title, there was a thank you from the author. There’s another Compass book coming out—this one is Lucy and Evan. However, in book six, “…the inimitable Reyes Walter will find his own happily ever after.” Yes, yes, and MORE YES!

I might’ve been a little giddy that India (from Personal Geography & Intimate Geography) had a couple cameos. I miss her and Cris. A lot. So much so, that I think a re-read might be in order.

This brings us to Slade. There are things about Slade I like, and other things I really, really dislike. Most of the time, I can get behind everyone’s right to have the kink they want. I wasn’t squicked out by Slade, or anything. I was just… I guess wary is the right word. Our personal experiences in life color the way we see people. Prior unfavorable experiences with someone can definitely conjure flashbacks. It wasn’t that bad. It did make me realize there are some things I probably need to look at, regarding myself, my vulnerabilities. There was one major thing I adored about Slade, though: he realized he had the power to *really* hurt Pressly. He did something about it, rather than ruin something beautiful. For that, I give the man props.

Pressly. I simply adored her. She has confidence as well as a soft side, and she’s not afraid to ask for what she wants. The way she was described in some of the scenes reminded me of the upcoming Suicide Squad movie’s portrayal of Harley Quinn—of which I’m in love and completely geeked out over seeing the flick. If you’ve ever encountered Harley, in any media, you might conjure an image of a sexy, sassy, self-sufficient woman that likes to serve a man in a specific way. To be honest, there’s no other way to describe Pressly. She does it in different ways through her day, across her week. But over-all, she’s a giver. Don’t get me wrong—she can totally take care of herself. She knows what she wants and needs now, post-divorce, and isn’t going to settle for just part of the enchilada. Most of all, I think I respect her confidence in Slade. She never sought to change him, never wanted him to be something for her that he wasn’t.

Magically, some other force drew Slade and Pressly together once. As readers, we’re lucky enough to watch the fireworks happen a second time. True North is the fourth title in the Compass series by Tamsen Parker, but could be read as a stand-alone. However, once you get a taste of Ms. Parker’s dark, sexy voice, you’ll want to go back for a bigger bite.

When Slade manages to earn the keys to Reyes Walter’s kinky kingdom, he finds himself face-to-face with none other than Pressly Allwyn, the pearl-bedecked love of his life whom he pushed into divorce six years ago.

One response to “Review: True North by Tamsen Parker”