Romanced by a SEAL 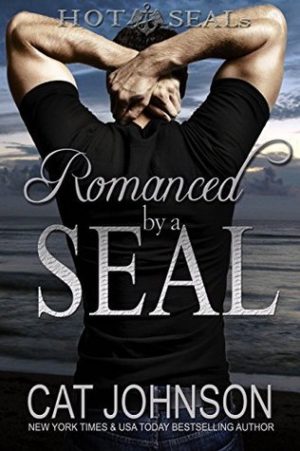 Too angry to eat the dinner she’d spent hours shopping for and preparing, Ali yanked hard on the kitchen drawer.

Just like everything else in Jon’s life, even the drawers in his condo were neatly organized. Rolls of plastic wrap lined up in precision formation amid aluminum foil and boxes of plastic bags in every size.

The sight only ramped up her anger.

Everything in Jon’s existence was in perfect order except for his relationship with her.

She was the messy junk drawer of his life.

That realization had her pausing, hand on the plastic wrap. No wonder he avoided spending time at home with her. Running out at every opportunity. Each excuse plausible but seeming more flimsy than the last.

It had been a mistake moving in together. Just because something made financial sense didn’t mean it was right.

Things between them had started to go downhill shortly after she’d moved in so it was pretty obvious to her that this decision, though practical, had been very, very wrong.

Hot angry tears pricked behind her eyes as she grabbed the wrap and yanked to tear off a piece.

The clingy plastic got tangled on the sharp serrated edge. She pawed at it but only ended up cutting her finger instead of the clear wrap.

“Shit.” Tossing the whole mess onto the counter, she shoved the stinging finger in her mouth and sucked at the thin stripe of red that appeared.

One handed as she nursed her wound, she grabbed her food-laden plate from the counter, intent on shoving it onto the fridge shelf uncovered.

Unwrapped food in the refrigerator—that would drive Jon crazy. Perfect. It would teach him for walking out—

again—this time after she’d gone to so much trouble to make a nice meal for him.

The spiteful thought had her feeling quite satisfied as she spun toward the fridge . . . and jumped as a scream tore from her throat.

That was followed directly by a huff of frustration. “Dammit, Jon. Will you please make some noise when you come in? You scared the hell out of me.”

“Sorry.” He tracked her with his eyes from where he stood in the kitchen doorway as she moved to the refrigerator.

Judging by the one brow he cocked up as he watched her, he definitely took notice of the unwrapped dish she shoved inside.

She closed the door and leveled a gaze on him, silently daring him to say a word. That he didn’t comment surprised her.

“What happened to your finger?” He lifted a chin toward the finger she held up in the air so she didn’t get blood on her clothes.

“I cut it on the plastic wrap box.”

He moved forward and took her hand in his, inspecting the wound. “You should clean it and put on a bandage.”

“It’s not that deep.” She hated that she couldn’t control how her heartbeat sped when he touched her.

“It could still get infected.” Standing close, he didn’t drop his hold on her hand.

She raised her gaze and found he was focused solely on her.

Those piercing blue eyes of his had gotten to her starting the first day she saw him on Rick and Darci’s front doorstep. When he looked at her like this, the depth of the feelings hidden within Jon’s eyes could still make her weak in the knees.

“Okay.” She felt breathless as she only vaguely remembered what she was agreeing to.

She reminded herself how often lately she’d seen those eyes go hard and cold as Jon slammed the wall down between them.

Drawing in a shaky breath she pulled her hand from his grasp.

He let her, but it was only to reach out and pull her body close. Holding her tight against him with the hands he clamped on her hips, Jon dropped his head and took possession of her mouth with a demanding kiss.

She wanted to stay angry.

Wanted to pull away and punish him, not give him what he wanted, but it seemed so long since he’d touched her. And it felt so good to know he still wanted her. She’d begun to doubt that as he became more distant and obsessed with work.

At least she’d hoped it was work and not something or someone else. She’d begun to doubt that too.

But right now there was no doubt what he wanted as he plunged his tongue against hers while backing her against the cabinets.

2 responses to “Sunday Snippet: Romanced by a SEAL by Cat Johnson”