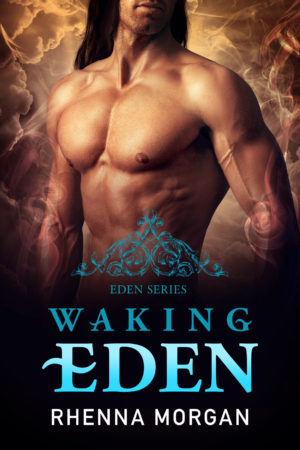 In this scene, Trinity’s allowed Ramsay to finagle an invite to her home on the pretense of helping her settle in from her recent move. Who knew setting up wi-fi could be so intense?

Trinity trailed behind him. His loose, long hair was the sexiest snub to conformity she’d ever seen, and his overall size was, well, big. Especially compared to her. Tight, defined muscles, wide shoulders, narrow waist, and a backside that made his easy swagger downright lethal.

He turned. His white T-shirt was tucked neatly into his low-slung jeans. Yep. The total hot guy package. Hard not to imagine the impressive parcel underneath.

She blinked and tried to force her mind back online. Oh, God. Totally busted staring at his crotch.

He grinned. Not just any grin, but a genuine shit-eating, caught-you-with-your-hand-in-the-cookie-jar grin. “Your router and cables?”

She staggered to the opened packing box on her desk and rummaged inside. At least she could hide her embarrassment behind the box flap at this angle. “I’m pretty sure they’re in here, but can you check the one by the bookcase?”

Deep breaths. She couldn’t be the first woman to ogle the guy. Not that his ego needed any extra boosts.

She peeked over the flap and found him untangling two gray cords.

“I’ll put the router on top of the bookshelf so you don’t clutter up your desk. That work for you?” Every move was smooth and efficient. Confident, like he did this every day.

She nodded and situated her computer, snapping to hand him whatever he asked for and otherwise aiming to stay out of the way.

He glanced up from behind her computer and lifted his chin toward the picture frame on her desk. “Those your parents?”

A pang knifed her heart. “Yeah. That was taken about a year before David died.” Carol looked so much different then. Happy and hopeful, even if she was still a little high-strung.

Trinity had come along and ruined life for both of them.

The clunk and rattle of hardware and cables stilled. Ramsay rested one arm on the top of her monitor. “If it makes you sad, why put it there?”

“They don’t make me sad. I just wonder if they would’ve ended up happier without me.”

Whoa. Where the heck had that come from? She never talked about her family with anyone but Kazan.

Ramsay twirled a cord between his thumb and fingers. “How could anyone be happier without you in their life?”

Trinity laughed, the sound bubbling up with a hint of resentment. “Well, you’ve only known me a total of twenty-four hours, so I’m not sure you’re a suitable judge.”

“Then educate me.” His intensity crept across the room and held her by the back of the neck, his silver eyes glinting.

No. Going there would only drudge up the sludge she’d fought to escape. Mental health meant accepting all your old junk, letting it go, and moving on. “It’s a long story best left behind.” She motioned at the cord in his hand. “Where’s that one go?”

He studied her for a few seconds and moved to the bookcase. “All right, if you’re not willing to talk, then you have to learn.” He held out the cord. “Get over here, and I’ll teach you how to do it for next time.”

The way he was situated against the wall with the bookcase in front of him, she’d be sandwiched mighty close to his big body. Too close.

Her abdominals fluttered and the muscles between her legs tightened. That’s why she’d agreed to bring him here. To see if anything else would happen. Maybe find out what real touch felt like.

Ramsay straightened, the predator she’d glimpsed in him the night before rushing to the surface.

Her pulse pounded in her head, drowning all ambient sound, and her deepening breaths echoed in her ears.

With a hand at her shoulder, he guided her into the space between him and the bookshelf. “Take this.” His voice was deeper. Distracted. “Plug it into the one that says WAN.”

Trinity slid the blue box closer, fingers locked on the cable with a death pinch. It was either that or drop the damned thing and lose the incredible heat radiating off his body.

The connector snapped into place.

“Now this end.” He handed her the other end of the cord, simultaneously closing what remained of the distance between their bodies so every amazing inch of his front pressed against her back. His other hand curled around her hip and his lips hovered beside her ear. “Plug it into the cable modem.”

She dropped her hand. The cord dangled between her fingers, her muscles unresponsive to anything but the man behind her. “I…”

His hand at her hip slid in and splayed low across her belly, nearly hip to hip. Powerful and confident.

He pressed his hips into her back, the package she’d ogled needing absolutely no imagination now.

A low, frustrated growl rumbled from his chest. “Turn around.”

She turned on autopilot.

He braced one hand on the bookshelf and cupped her face with the other. His fingertips pressed against her scalp, the urgency of his touch prickling all the way down her spine. His breath fanned warm against her face. “Have you ever kissed a man, Trinity?”

The proximity of his lips brought a tingle to her own. Her voice sounded different. A little broken and a lot breathless. “A small one. Quick.”

He leaned closer. The side of his nose grazed hers as he splayed the hand he’d braced against the bookcase to the small of her back. “Tell me you want more.”

Huh? Why was he talking? Her entire world centered on his mouth, the plush, wet contact she’d always fantasized about the only thing worth entertaining.

“I won’t take what you don’t offer.” The arm around her back tightened. “Tell me.”

“Yes.” A million times yes, if he’d shut up and get with the program.

His mouth tilted in a wicked grin and he cupped the back of her head, hair tangled in his fingers. “I promise.” His lips skated over hers in a teasing whisper and his husky voice rattled her senses. “This won’t be small. Or quick.”

One response to “Sunday Snippet: Waking Eden by Rhenna Morgan”