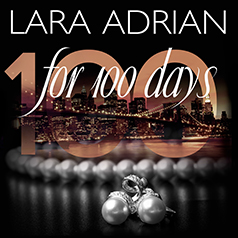 Avery is a starving artist living in New York, scraping by as a bartender for a trendy club. She hasn’t sold anything in a year and is being dropped by her gallery. Now with an eviction notice looming, Avery gets a gift when Claire asks her to house sit her uptown condo. It’s at her new, albeit temporary, home that she first runs into the powerful and handsome Dominic “Nick” Baine. When the pair meet again at a gallery showing, sparks fly, and Avery decides to ignore her inner warning signs, jumping into bed with Nick. Now she must balance her feelings and the lies she’s spinning until Nick discovers the truth and dumps her.

I’m going to be brutally honest here, For 100 Days was not what I thought it would be, nor what I wanted in a book. While the story had promise, it definitely falls into the erotic romance side of contemporary romance, which I wasn’t expecting. There are a number of drawn-out sex scenes, and I got bored with it. Additionally, I took issue with Nick telling Avery she doesn’t need a safe word with him. It was reckless, and considering Avery’s history, frustrating that she didn’t have strong reservations. Had I known all of this before I picked up the book, I probably wouldn’t have read it; but I adore Ms. Adrian’s paranormal work and wanted to give this a try.

Another issue I had with the book is that it is highly repetitive. Avery is a self-destructive heroine, making poor decisions based on her lust for Nick. She’s constantly reminding the herself, and the listener, that she doesn’t belong in Nick’s world, that she’s lying to him. It was annoying. I wanted her to get over it and own it, which she does eventually, but by then, I had lost interest.

However, my biggest issue is SPOILERS AHEAD…

THIS ISN’T AN HEA ROMANCE!!

That’s right. I listened to the entire book and then found out at the end that Nick and Avery’s story continues to the next book. Avery weaves her web of lies for the entire book, comes clean in the last chapter, and then lies again. I wasn’t happy at all.

On the positive sides, I enjoyed Avery’s artistic eye as she described moments and scenes in and around her life. She helped paint a visual that was pleasing and interesting. Additionally, the narrator did a good job with Avery’s first person, present tense POV, even at a very fast speed of 2x, which I finally changed to because I wanted to find out how the book would end, but wasn’t really enjoying the story. I did feel her portrayal of Nick wasn’t what I would have liked, but it wasn’t bad. I would certainly listen to more from Ms. Morton.

Unfortunately, For 100 Days was pretty much a miss for me. The entire sex-filled story focused on how Avery shouldn’t be with Nick, but couldn’t walk away. And in the last chapter, when she finally matures and grows some, she loses all she’s gained and more with her concluding act. I have no respect for Avery, and I agree with her self-assessment that she doesn’t deserve Nick. This book could have been edited down and more content added at the end to create a more complete story. I was disappointed. If you are into long, drawn out erotic romances, this book is for you. But not me.

Struggling artist Avery Ross is barely scraping by. Bartending at a trendy New York City restaurant for an overbearing boss and two weeks away from losing her apartment to a condo developer, she’s desperate for a break. So when she’s offered a temporary housesitting job, she takes it.

Living at one of the poshest addresses in Manhattan is like entering a new world–one that catapults her into the orbit of billionaire Dominic Baine, the darkly handsome, arrogantly alpha resident of the building’s penthouse. What begins as a powerful attraction soon explodes into a white-hot passion neither can deny.

Yet as scorching as their need for each other is, Avery doesn’t expect Nick’s interest in her to last. Nor does she dare to dream that the desire she feels for this scarred, emotionally remote man could deepen into something real. For Avery has secrets of her own–and a past that could destroy her . . . and shatter everything she and Nick share.

4 responses to “Listen Up! #Audiobook Review: For 100 Days by Lara Adrian”