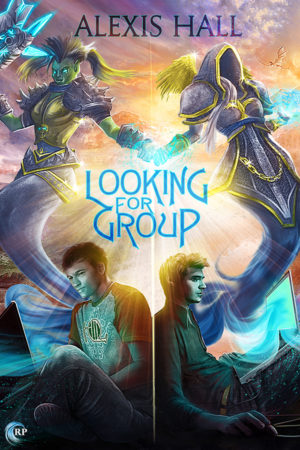 Looking for Group
Author: Alexis Hall
Reviewer: B.
Rating: A

Beginning with what is essentially a “job listing” in a fictional MMO, Looking for Group is one of the most unique and fun stories about falling in love that I’ve had the pleasure of reading in a very long time. Told exclusively from Drew’s perspective, it’s a noteworthy lesson, not only about accepting others for who they are, but being honest with ourselves, as well. There’s actually much more to it than that, but it’s better to just read it firsthand.

One of the most fascinating things about Looking for Group is what felt like a fairly thorough immersion of the reader in the gameplay of the fictional MMO, Heroes of Legend. Though Mr. Hall clearly took as many facets of his audience as possible into consideration when writing the game scenes, I was still thankful for the glossary at the end of the story. If you don’t already speak MMO, this should definitely be read first. Aside from being very helpful in following along in HoL, it’s an extremely entertaining feature in its own right, and, in general, I thought it was a nice touch.

As he’s the only narrator, we see the world of the story through Drew’s eyes, and there were several moments when I wished with all my heart that I could derail certain trajectories he’d flung himself along before it was too late. But, Mr. Hall is an excellent storyteller, and that would have been too easy. Instead, we’re given the chance to ask ourselves what the term “real” actually means, and hopefully acknowledge that our definition isn’t likely to be the same as anyone else’s. And that’s okay. Despite Drew’s best intentions, there simply isn’t a universally applicable pie chart for “The Equitable and Acceptable Distribution of Self.”

As usual, Mr. Hall has created an entire cast of vivid and engaging personalities in Looking for Group, each unique and “alive,” whether secondary or no. Drew and Kit are each completely wonderful, and witnessing them banter with each other was a real pleasure, although it was Kit who really stole my heart. The other characters are no less remarkable, however, and I appreciated the variations in the ways we get to know them (online vs. “in the flesh”).

Looking for Group is a fine story with some delightful twists, and I loved every moment I spent grumbling and gesticulating at my e-reader. While it may frustrate some who aren’t familiar with the gaming terms used, the glossary helps tremendously (and is fun!), as does the repetition of action and outcome which provides a sense of normalcy after a while. Still, it was even easier once I remembered that most of the groups where I live and love have their own kinds of language, too. Unlike anything else I’ve read, Looking for Group is both imaginative and very, very sweet, and one I’ll be keeping on my favorite bookshelves for a long time to come.

So, yeah, I play Heroes of Legend, y’know, the MMO. I’m not like obsessed or addicted or anything. It’s just a game. Anyway, there was this girl in my guild who I really liked because she was funny and nerdy and a great healer. Of course, my mates thought it was hilarious I was into someone I’d met online. And they thought it was even more hilarious when she turned out to be a boy IRL. But the joke’s on them because I still really like him.

And now that we’re together, it’s going pretty well. Except sometimes I think Kit—that’s his name, sorry I didn’t mention that—spends way too much time in HoL. I know he has friends in the guild, but he has me now, and my friends, and everyone knows people you meet online aren’t real. I mean. Not Kit. Kit’s real. Obviously.

Oh, I’m Drew, by the way. This is sort of my story. About how I messed up some stuff and figured out some stuff. And fell in love and stuff.

To celebrate the release of Looking for Group, one lucky winner will receive their choice of 3 ebooks from Alexis Hall’s backlist. Leave a comment with your contact info to enter the contest. Entries close at midnight, Eastern time, on September 3, 2016. Contest is NOT restricted to U.S. entries. Thanks for following the tour, and don’t forget to leave your contact info! Open to participants who are legally allowed to participate in such a contest as allowed by their local laws. All federal, state, local, and municipal laws and regulations apply. Void where prohibited. No purchase necessary. By participating in the contest, participants agree to be bound by the decisions of the contest sponsor. Prize will be delivered by the contest sponsor. This blog, its reviewers, and the owner are not responsible for items lost in the mail. By entering this giveaway, participants agree to abide by these terms.