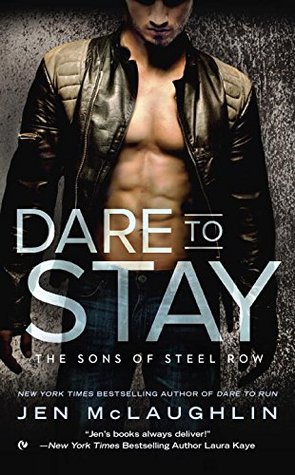 Having betrayed his best friend in order to take his position in the Sons of Steel Road gang, Chris was the “bad guy” from the first Sons of Steel Road title, Dare to Run. Dare to Stay opens moments after the dramatic conclusion of the previous book, with Chris experiencing a true epiphany; remorse over his actions and the loss of his only true friend. Beat up and near death, Chris breaks into a pharmacy to help himself recover. However, he wasn’t expecting genuine kindness from his longtime crush, Molly.

Molly’s father was killed in a gang-related hold up five years ago, so it’s no wonder she seldom goes out after dark and never takes risks with her heart. However, finding her neighbors’ son, Chris, badly injured in the alley on the anniversary of her father’s death feels like a sign to Molly, and she insists on bringing him home and helping him. Now the pair dances around their unspoken attraction, trying to fight their feelings.

After having mixed feelings about the first book in the series, I found myself surprisingly entertained with Dare to Stay. I was concerned with the plot – one involving the redemption of a man who has committed an awful sin; however, Ms. McLaughlin handles the entire plot with a healthy dash of realism together with a strong emotional thread. I felt Chris’s absolution was tempered with the perfect amount of guilt and desire to change. The author created a strong backstory for Chris, one filled with abusive parents and attempts to do the right thing, so when he realizes the errors of his ways, it comes off sincere.

Chris and Molly work as a couple because they have a history. I love the little bits of romance an unworthy Chris gave to Molly because she was a light in his dark world. Likewise, Molly recalls her previous interactions with Chris with fondness and a bit of lust. When the pair finally gives into their mutual desires, it is smokin’ hot! The scenes worked as an extension of their strong feelings, both lust and love, because the author developed a solid history between the pair.

The issues I had with Dare to Stay were minor – the “I’m no good for you,” and “I’ll have to leave her” sentiments dragged for the first third to half of the book. It continued even after they got together, but I loved that they actually fought to be together. I didn’t mind the back and forth, on-again-off-again, because both characters had conflicting emotions. They felt love for one another, but didn’t see how being together would work. And while some may not like how neatly everything tied up in the end, I did… I love me some happy endings. I liked how Chris dealt with his betrayal, and his decisions worked for me.

In the end, Dare to Stay was an enjoyable, entertaining read. I liked that Chris was a redeemable character, especially after his betrayal of his best friend in the first book. Molly and Chris were both sweet and completely sexy. Will they work in the long run? I think so… the author put a lot of passion into her characters, and their actions gave me hope for their longterm story.

Bruised and bloodied on Boston’s mean streets, Chris O’Brien is reeling from the loss of his childhood best friend. But after barely escaping a hit placed on his head, Chris is desperate to live. A safe haven comes to mind – the home of the perfect girl from his childhood, Molly Lachlan. Before he has fully considered what it would mean to involve her in his mess, he finds himself on her doorstep.

When Molly agrees to let Chris inside her home, she realizes she’s also letting him into her life. Danger and desperation are coming off him like steam, and yet she can’t bring herself to turn him away. His bad boy charm always had a hold on her, but now there’s a soulfulness and sorrow in him that she’s never seen before. And despite the heart-stopping risk of helping him, she hopes against all reason that he’ll stay…

Reviews in the Series:
Dare to Run by Jen McLaughlin (Sons of Steel Row #1)

6 responses to “Review: Dare to Stay by Jen McLaughlin”