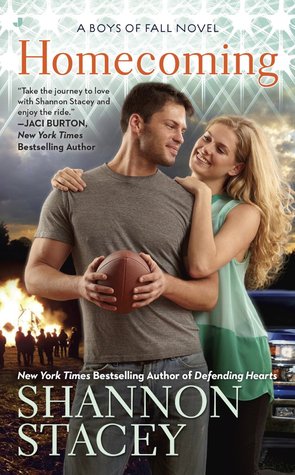 Homecoming begins immediately following the conclusion of the previous book, where we find several of the Stewart Mills residents in the hospital following the aftermath of Coach McDonnell’s apparent heart attack on the football field. While recovering, Coach wants Sam Leavitt, former Eagles championship quarterback, to come home from Texas and coach the team. Even though Sam agrees, he does so knowing it is temporary because he will never move back to Stewart Mills, the place of his nightmarish childhood.

Jen Cooper grew up in Stewart Mills and loves her job as the high school guidance counselor. After her amazing one-time hookup with Sam back in the summer when he was home (for the first time in over a decade) for the football team fundraiser, Jen never wanted to see bad boy Sam again. Yet when he shows up in Stewart Mills to stay for a while, Jen isn’t sure she can deny their strong attraction.

Homecoming is the third (and presumably final) chapter in the Boys of Fall series, which features the goings-on of small-town Stewart Mills, NH. The town fell on hard times a while back, and I love how the town finds joy and regains hope through their high school football team. I like that while each book is a standalone, each builds upon the previous as far as character development. By the time we get to this third book, I care about each of the characters. I also like that we see the town mend and grow. The tone of the books progressively become more positive and hopeful because of the changing circumstances.

Overall, I loved Jen and Sam individually and as a couple. Both have their heads on straight and don’t tend to do ridiculous things or make silly relationship mistakes. Jen rocks and has her life together, which I appreciate. I love that she’s smart and caring, which is perfect since she is a respected guidance counselor. What I admire most about her character is that she THINKS like a counselor. She isn’t making stupid decisions or letting Sam get away with crap. Ms. Stacey carried her personality through every action and decision.

And Sam is also a good, smart guy. While he does have a rocky past, he’s learned to deal with it like an adult. He takes into consideration others and how his actions will impact those closest to him. And while he still deals with lingering negativities from his youth, he doesn’t let the dark thoughts control his actions. This is SOOOOO refreshing. Homecoming chronicles Sam’s growth as he learns what it means to forgive his alcoholic mother and coach these young, impressionable boys.

Another great aspect of this book is the humor, which felt so much more than what was found in the first book. This is probably because of the football team’s success giving the town hope. Here is one example that made me laugh:

As Jen walked around the truck, she heard Sam talking to [Officer] Kelly. “Can you turn the lights and siren on?”

“No, you’re not getting a police escort to O’Rourke’s.”

“If I go first, then it’s more like a police chase than a police escort.”

“Get in your truck before I shoot all your tires out and leave you here while Jen and I go have burgers.”

There were only a few small things that detracted slightly. One very small hang up is what creates a wedge between the pair near the end of the book. I wasn’t happy with how cut and dry Jen was about the issues, apparently unwilling to even consider how to make things work. While I do agree they could have dealt with it by talking it out, I think that the reactions were true for the characters. Change is very hard, and most people’s first reaction is to resist it and find reasons why it can’t happen.

In the end, Homecoming is another wonderful small-town romance from Shannon Stacey. Ms. Stacey creates lovable, relatable characters and gives them life through her magnificent storytelling. This story is not only a wonderful romance, but also a heartfelt tale of man, and town, healing the wounds of the past.

Sam Leavitt has two goals when he returns home to Stewart Mills to fill in for Coach McDonnell: to keep the school from finding a permanent replacement while Coach gets back on his feet, and to reconnect with his mother. As substitute coach for the high school football team, Sam must work hard to keep the boys on track, and that means spending time with the sexy guidance counselor he shared a hot night with months ago.

Jen Cooper knows what she’s looking for, and it’s not Sam—he wasn’t even supposed to come back. She wants a cultured, romantic soul, not some rough-around-the-edges guy with calloused hands—and a hard, muscular body. But seeing him every day forces Jen to question what she really wants out of life. And as Sam begins to deal with his past, Jen discovers there’s more to him than she imagined.

Hunter straightened, still trying to catch his breath, and looked at some spot past Sam. “Your girlfriend’s coming.”

Frowning, Sam turned and saw Jen making her way toward them, a sheet of paper in her hand. “You feel like running laps until you puke, Cass?”

“Miss Cooper and I are friends, not that it’s any of your business.”

When the kid walked off to rejoin the team, Sam turned to Jen, wondering what if any of that conversation she’d heard. He was fairly sure she couldn’t have heard the girlfriend remark, but the part about them being friends might clue her in to the fact they were the subject of gossip.

Not that that would be a surprise in Stewart Mills.

“Basically your entire weekend next week is shot,” she said, handing him the sheet. “The parade starts at seven on Friday night, but it takes an unbelievable amount of time to get ready for it. Then there’s the bonfire. The game Saturday afternoon, and then the dance.”

“Okay, wait. So everybody’s going to be out until all hours of the night, and then they play the biggest home game of the year. And then they dance?”

Jen laughed. “It’s been this way for as long as there’s been a Stewart Mills High. You rode in the parade and then did who knows what with who knows who at the bonfire until the wee hours. Then you played—and won all four years, if I remember correctly—and then danced.”

“I was like seventeen at the time. And we lost the homecoming game my freshman year.”

“I was still at the middle school when you were a freshman. And you guys weren’t all together on varsity yet, were you?”

“No. It was about halfway through my sophomore year season that we got our sh*t together.”

They wandered back to the benches, keeping an eye on the practice drills. Sam noticed Dan kept his cell phone in his hand at all times and checked the screen frequently, but he wasn’t about to give him a hard time about it. Having a new baby and his mother-in-law at home had to be hard on the nerves.

“They look pretty good,” Jen said after a while. “It’s interesting to see them out there without Coach. They must like you.”

“Thanks, but I don’t think it has much to do with me. I’m not sure these kids need anybody on the sidelines at all.”

“I don’t know about that. Blow the whistle.” When the boys all looked, she pointed at the freshman safety—Danny something, Sam thought—and then beckoned him over. “You can’t keep up with the wide receiver if he’s looking forward and you’re looking behind you.”

“I gotta play the ball, Miss Cooper. If I don’t know where the ball is and I touch him, that’s a penalty.”

“You’re practically running backward, so you’re not going fast enough to touch him at all. You need to watch him. He knows where the ball is supposed to be thrown and if he’s still got his head down, running flat out, he’s not there yet, so neither are you. You’ll learn to spot when he’s getting ready to make his move and that’s where the ball is.”

“Yes, ma’am.” The kid put his helmet back on and trotted out to his teammates.

Sam looked at Jen, who shrugged. “When you spend most of your life hanging out at Coach’s house, you learn things.”

Her cheeks turned pink and she rolled her eyes at him as she turned to face the school. “If you could not make me blush in front of two dozen teenage boys, that’d be great.”

“This dance thing,” he said. “I have to chaperone, right?”

“Yes. You don’t have to dress up or anything, though. What you’re wearing would be fine.”

“I don’t care about the dress code. Do chaperones get to dance?”

She laughed. “Are you going to get out on the dance floor and bust some moves?”

Her lips parted slightly and then she gave him a saucy smile. “I’ll have to check my dance card. It might be full.”