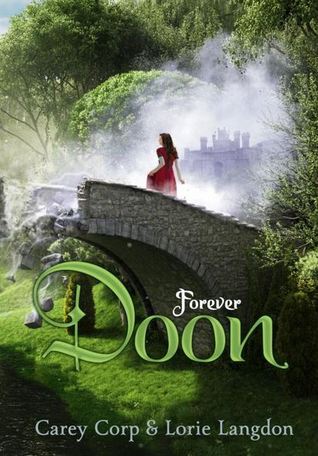 I’ve read the Doon series from beginning to end. Not being one for fairytales with the whole princess and prince thing, I was surprised at how much I thoroughly enjoyed the first two titles in the series. After the first two though, I started having some fairly major issues with the novels. I felt as though the target age for the series changed to a younger audience, as if series was being dragged on, like the authors lost their focus and were unclear where it was going, and like the classification of the novels changed.

Forever Doon, like the three before, was a multiple point of view book. Although there is nothing wrong with that, there is a point when it isn’t needed. Forever Doon was told from four different points of view. It was clear why it was told from three of the four, but the fourth viewpoint seemed excessive, to the say the least, and completely unnecessary. Two of the characters were with each other throughout the entire novel, and having both points of view was just each story being retold, most of the time word for word. The fourth viewpoint did not add any extra insight or necessary details through the whole novel all it did was up the word count, and I firmly believe if it doesn’t add to the story it should be left out.

Maturity was another topic I often found myself thinking about as I read this book. The main characters are all said to be high school graduates and well above 14, yet I often felt as though they were acting like they were middle-schoolers. Not only was the language used, such as “skellies,” immature and childish, the way character on character conflict was solved was immature. Many times the characters would simply yell at each other instead of actually figuring out the problem, and then it would magically disappear like it never happened. It was almost as though a few of the characters were developing, but not in a way that fit the story. I expected them to mature as they faced various conflicts and it felt like the opposite was happening.

I was hoping that because the series was originally planned for four books, the series would have more insight and further character development. Instead it seemed like the characters were developing backwards while the story was moving forward at full force. Not only that, but I also felt like the backstory was very vague and constantly changing. The consistency that I read in the first two novels was lost by the fourth. Also because of the way the series was written and turned out this is not something I would classify as a “Young Adult” but more a preteen series. If you enjoy fairytales or have started the series and want to finish it, then pick up Forever Doon. However, if you’re expecting a book geared for Young Adults I think you’ll be disappointed.

With the witch of Doon on the throne, Jamie believed dead, and Duncan and Mackenna trapped in Alloway, Veronica has no choice but to put her grief aside and prepare her remaining followers for the impending battle against the false queen and her forces. But while on a covert mission to steal a powerful elixir from the castle, Veronica discovers her true love may actually be alive, and fighting a battle of his own.

With the Brig o’ Doon destroyed and the portal fragmented, Doon’s forces are not only divided, but also isolated in different dimensions. With the help of a storyteller as ancient as the witch herself, Kenna and Duncan learn they must rebuild the bridge to have any chance of crossing back into Doon with their ragtag army. But when Mackenna insists on fighting as well, Duncan soon realizes the only way he can ensure her safety is to turn her into a cold-hearted killer.

For Vee, Jamie, Kenna, and Duncan, saving their kingdom while keeping their lives intact will take a miracle.

One response to “Review: Forever Doon by Carey Corp and Lorie Langdon”