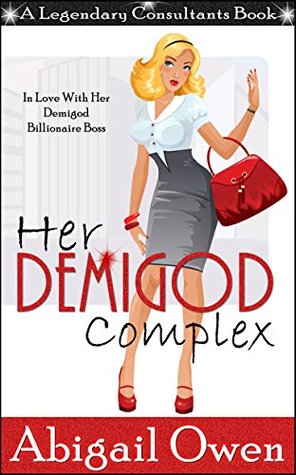 Gikany and Una were able to go back and read the first novella in the Legendary Consultants series after reading the second novella, The Worse for Were, first.  Her Demigod Complex tells the story of Leia and Castor, a broken nymph and a demigod.  Despite learning more of the intriguing mythology of this world from this first novella, we were a bit disappointed.

We liked Leia and Castor.  Although their journey was the seemingly typical boss and assistant trope, there was a nice twist to it.  They fought their attraction for different reasons and their individual reasons for holding back were logical.  They even communicated well with each other (even when hiding their true feelings) until Leia panicked. It helped to have both perspectives in this novella to give weight to the romantic complications.  Leia’s broken status and Castor’s demigod status were fascinating.  The mix of the paranormal was enriching to the world.

The overall plot of the vengeful werewolf was gripping.  But since the second novel is the same overall plot with different focal characters, we were disappointed in the rehash.  Maybe we would have felt differently if we had read these novellas in the correct order, but we don’t think so.  We have read another series by Ms. Owen and therefore know what she is capable of.  Although this is a novella series, we still expected more.  With the ending of Her Demigod Complex, we look forward to either learning more about Delilah, the owner of Legendary Consultants or Rowan, the witch Kaios forced into his dastardly plans.

Although we liked Her Demigod Complex, we did have a bit of an issue with it feeling like a retelling of The Worse for Were.  We enjoyed Castor and Leia’s romantic journey, especially as it was a new twist on a familiar trope.  The world with the varied paranormal entities is rich and fascinating.  We look forward to the next story in hopes that it will give light into Delilah or provide a happy ending for Rowan.  If you enjoy a lighthearted paranormal romance, you might want to pick up the Legendary Consultants series.

Our Rating: B- Liked It, but I had a few small issues

When Legendary Consultants placed Lyleia Naiad in her job as Executive Assistant to a high-powered billionaire, she was given one directive–do NOT fall in love with him. Given that he’s a demigod, a successful businessman, and handsome as sin, makes that a tall order for anyone. But as an ex-nymph, she has the unique ability to resist his god-like charms.

Or does she? More than a year later, Castor Dioskouri has managed to capture her heart, a feat no man, demigod, or god has ever managed. Given the reason she was hired, she’s kept her feelings to herself. Besides, Cas is still in love with his deceased wife from over a millennium ago, and Leia is a failed nymph who couldn’t protect her own spring.

But now, they must attend a werewolf mating ceremony together. An event where the pheromones fly, and so do clothes, inhibitions, and common sense.

Can Leia resist her heart and her boss? Or will she lose her pride, her job, and her mind trying?

Reviews in the Series:
The Worse for Were by Abigail Owen (Legendary Consultants #2)

5 responses to “Review: Her Demigod Complex by Abigail Owen”