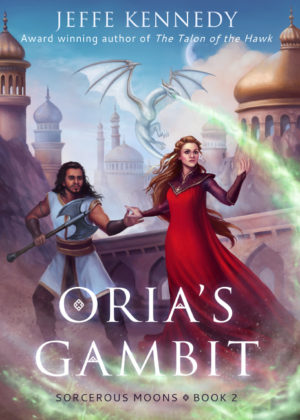 After the cliffhanger in the previous book, Lonen’s War, Gikany and Una were eager to start Oria’s Gambit.  We enjoyed it though it was a completely different feel from the previous novel.

We go from a fast-paced novel filled with battles, negotiations, and confrontations to one that is a battlefront of politics and maneuverings filled with anxious waiting and debating.  Though it was still very gripping, it was a change from the pace of the previous novel.  In Oria’s Gambit, Oria and Lonen race to obtain the throne in Baran in order to protect Lonen’s (and Oria’s) people from Oria’s youngest brother, Yar.

At first we thought Yar to be a typical youngest child, indulged and spoiled.  It was fitting he seemed entitled since he came into his power early.  However, through the course of this novel, his cruel nature comes to light (at least in Una’s point of view).  He is more than just selfish.  It is interesting to note that maybe because of Oria’s magical “flaw,” she is more compassionate and humble.  It seemed her brother Nat – who came into his power late, showed a similar humility that Oria’s other two brothers seem to lack.

We continue to enjoy Lonen and Oria’s journey.  They both genuinely care for one another.  The banter between them (and including Chuffta – still our favorite character) is endearing as is the palpable tension between Lonen and Oria.  Lonen’s sensual teasing is passionate as it is sweetly compelling.  Their relationship flows just as seamlessly as the plot.  Though it does not end up where we predicted, due to another cliffhanger ending, and we are eager to see what is next.

Gikany and Una continue to enjoy this world, and with Oria’s Gambit, we are further immersed in the Baran culture.  We look forward to the next novel, not only to see what happens next, but we hope to see more of Chuffta (as well as Lonen and Oria). We also hope that we will experience more of the Destrye culture.  If you enjoy fantasy with some slow-burn romance, you may have to give this series a try!

A Play For Power

Princess Oria has one chance to keep her word and stop her brother’s reign of terror: She must become queen. All she has to do is marry first. And marry Lonen, the barbarian king who defeated her city bare weeks ago, who can never join her in a marriage of minds, who can never even touch her—no matter how badly she wants him to.

To rule is to suffer, but Lonen never thought his marriage would become a torment. Still, he’s a resourceful man. He can play the brute conqueror for Oria’s faceless officials and bide his time with his wife. And as he coaxes secrets from Oria, he may yet change their fate…

With deception layering on deception, Lonen and Oria must claim the throne and brazen out the doubters. Failure means death— for them and their people.

But success might mean an alliance powerful beyond imagining…