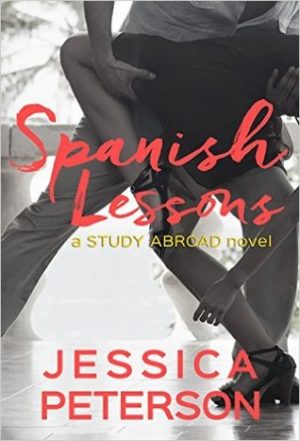 Spanish Lessons was good read. I finished the other night and needed to let it marinate. Ms. Peterson’s voice was authentic and engaging. Overall, I enjoyed the characters—especially at the end.

Part of the reason I didn’t give this title an A rating is because there’s probably a generational gap or a regional difference, and I was confused by some of the usage. For example, ‘hookup’. Darlings, I graduated from high school in 1986. When we said ‘hook up’, we meant having sexy time. I understood, by context clues and world-building this was not the case. But it bugged me a little. Probably a ‘me’ thing. Because I’m old and set in my ways. Don’t let this little thing discourage you from picking up this title, though!

There was a TON I adored about Spanish Lessons, the first title in the Study Abroad series. All the art made me want to die—or visit Spain. I actually used Google Images to peruse paintings by artists mentioned in the story. I’m a geek like that. It was pretty spectacular to read about a character that is almost like the late-80s me, in some ways. Ms. Peterson’s description was vivid—which is important to me, as I’ve never had the opportunity to travel abroad. Even though I really want to, and now Spain is on my list.

I liked Vivian well enough, I suppose. She vacillated on her decisions entirely too much; the inner conflict was a little overdone for my taste—but if you like your characters to work for their Happily for Now, then pick up this title. I get the whole inner conflict and the romance formula. It was really nice, however, to see Vivian grow as a person. Which is why, by the end, I felt more connected to her and was much less irritated by her waffling.

Maddie, as Viv’s bestie, was distant for a chunk of the story, but we get to read about her next—Lessons in Gravity was released in April! Come back next week for my review.

This brings us to Rafa. I was really glad he was depicted as a graduate student and not anything older. Then again, I might be slightly squicked out by the teacher-student relationship thing. There wasn’t as much of an age disparity, and that seemed to work for Viv and Rafa. Also, if I ever travel to Madrid, I want a Rafa of my very own, please! Since the POV for this story was all Vivian, we don’t get to hear Rafa’s thought process. But, we do get to see Viv’s perception of it—and all along Rafa was a straight shooter. His honesty was really refreshing and makes me wonder if we shouldn’t all party until the wee hours of the morning every day—seize life and live it.

My take-away from Spanish Lessons is poignant. There’s lots of ‘should dos’ in life. Not all of them are going to work for me. Time to pull up my big girl panties and be honest with all concerned. It’s not all about how they perceive me—if they don’t like me, screw ‘em—it’s about how I’m honest with myself that matters…which is a message I’ve been working to fulfill lately.

Vivian Bingley has big plans for her semester abroad in Spain…

Along with her BFF, Maddie, Vivian hopes to indulge her inner Art History nerd by visiting the best museums in the world. She also wants to tackle more practical concerns—like a less than stellar GPA in her major, Economics—with the help of a Spanish tutor.

But falling for her studly Spanish tutor definitely isn’t one of them.

Madrileño Rafa Montoya is the stuff study abroad dreams are made of: super studly and super smart. He also happens to be super into Vivian. With his wicked dancing skills and his passion for the arts, he tempts her to throw caution to the wind and live out her wildest dreams.

Only problem? Maddie wants Rafa, too, and Vivian promised herself she’d never settle for second best again…not after a hookup-gone-awry last semester left her heartbroken. Is it best for Vivian to protect her heart at all costs? Or is letting Rafa in worth the risk?