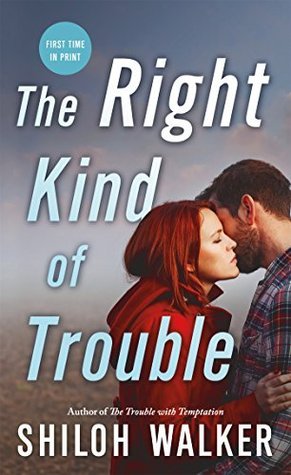 Reading the McKays series has been a delight. In The Right Kind of Trouble, readers of the first two titles will be pleased to know we get to hear a whole lot more about Moira and Gideon, as well as revisiting couples we’ve come to know and love. Brannon and Hannah, as well as Neve and Ian, play integral roles through this title, which wraps up the plot arc for these characters.

Moira McKay has had a rough life. Her parents’ death caused her to grow up entirely too soon, putting her own life—and love—on hold. But that’s not all. Mystery is wrapped around the matriarch of the McKay clan. What IS the ‘treasure’ of which legend was built? Moira knows, and someone is out to dredge the information out of her. Moira is an interesting character. She’s powerful, yet sensitive and—dare I say it—needy…in all the right ways. She’s afraid to show her vulnerability to those around her. As she’s grown the McKay empire, she’s learned a thing or two about trust and where to place it. The thing is, there’s always a wrench thrown into what we think we know. Moira’s strength and tenacity is what draws me to her as a character. She’s not one to give up, nor is she one to take things lightly when they’re super serious. Compounded with hits to her business holdings, Moira is…irritated, and maybe a bit terrified. She has serious cause to reflect on her life, and makes some startling revelations.

This is where Gideon comes in. Not only is he the chief of police in McKay’s Treasure, he’s Moira’s the one that got away. Fireworks splash across the sky any time these two are in close proximity. We’ve seen it in the first two titles in the series, and The Right Kind of Trouble gives us a spectacular finale display. One of the things about Gideon, however, is the fact that he’s been put off so much by Moira that he’s reluctant to let his heart be entrapped by the redheaded vixen. It’s super difficult to open up and let love in when you’ve been burned by the most brilliant thing you’ve ever seen more times than you can bear.

Like many of Ms. Walker’s titles, it’s difficult to review without spoilers. Suffice it to say: I DIDN’T SEE THIS ONE COMING. And that is something pretty spectacular in, and of, itself. The way Ms. Walker leads readers to the culmination of this plot arc is masterful. The true villain isn’t revealed until quite late in the story; until that point, the clues were…indirect. Readers of romantic suspense should definitely pick up Shiloh Walker’s McKays series, and Read. Them. In. Order. The over-arching suspense plot unravels slowly, methodically, and in an unpredictable manner.

In the small Southern town of McKay’s Treasure, everybody knows that the handsome local police chief, Gideon Marshall, has been carrying a torch for Moira McKay. It’s also no secret that Moira has been rejecting Gideon since…forever. But after an attack from a mysterious stranger bent on taking down the McKay family, Moira becomes filled with distrust toward most men. Now she wonders whether she’s been wrong about Gideon all along—and if it’s not too late to admit him back into her life…and into her bed…

Gideon has finally convinced his wasted heart to give up on Moira, who he’s loved since he was sixteen years old. Moira’s attack changes everything, however—and he vows to protect her. But how much is he willing to risk for a woman who’s always kept him at bay…until now? And is it too late for Moira to tell him that her love for him has always been locked deep in her heart—and he holds the key?

2 responses to “Review: The Right Kind of Trouble by Shiloh Walker”