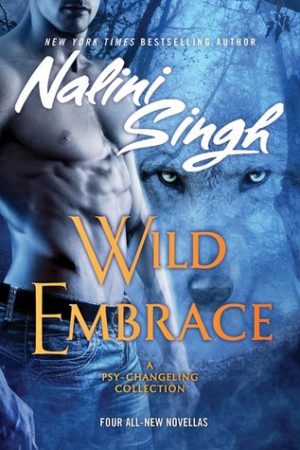 Wild Embrace is a collection of short stories and novellas that fall at different points of the known Psy-Changeling timeline, most covering one specific point, with “Dorian” spanning several years from his youth to adulthood. Each story is standalone and falls outside the overarching storylines of the series.

The story shares the chaste, forbidden love between a human engineer and a telekinetic Psy in the days before Silence fell. Tazia left her small village years ago, never to return. She is from a small village with a traditional upbringing, resulting in a tight moral code. But it is also an unforgiving way of life, based in her account of her family and why she cannot return. Stephan is a powerful Psy with fractured Silence due to a tragedy that left him orphaned at the age of four.

The story is sweet and simple, with the focus on learning more about each other rather than their physical attraction. The tale enhances the Psy-Changeling world through demonstrating how love existed in the Psy race before the fall of Silence. In fact, it shows why Silence needed to end. Even though I know what is in store for the future of the Psy race, it didn’t effect my enjoyment of the story, which left me with a feeling of hope.

This is more of a short story or collection of slices of life, rather than full novella. Fans of the series will enjoy these glimpses into Dorian’s life as he struggles with and learns to live first as a dormant shifter and second as a true Changeling. I enjoyed seeing how Dorian’s pack supported him in every step of his journey, helping to create one of my favorite characters of the series.

Felix is a submissive wolf from SnowDancer, and Desiree is a DarkRiver leopard soldier. Desiree has admired the gentle yet strong submissive wolf from afar but fought her desire to touch him until he gives her permission. Felix was burned by a dominant female in his past and refuses to consider even a fleeting relationship with Desiree.

Felix and Desiree’s romance is unlike most Psy-Changeling stories in that it features a female dominant and a male submissive (these are terms for the animal, not sexual preferences). I enjoyed the dynamics and the thoughtfulness of each partner when considering what the animal part of their nature needed to be happy and secure. Overall, it’s a kind and caring romance, just what one would expect from Nalini. It’s a quick to “I Love You,” but all part of the Changeling mating and romance.

Seven years ago, Kenji broke Garnet’s heart. He left her on her 21st birthday without explanation as to why. Now each is a lieutenant in the SnowDancer pack, and the pair must work together to solve a murder mystery… and their mutual unrequited feelings.

Kenji has always loved Garnet, but when he received news that would alter their future, decided to stay away from Garnet, rather than give her a choice, afraid she’d stay with him out of loyalty. I completely understand why, and although the reason behind it is valid, I was a bit let down when he finally came out and shared it with Garnet. I felt like, “Dude, you should have let it go long before this.” I like that Garnet gets over her hurt and goes after Kenji, pushing and claiming once she realizes he’s suppressing his true feelings.

The mystery of what happened to pack member Russ Carmichael is a big part of the story and an exciting addition, shared side-by-side with the romance. Although I figured out the plot right from the start, I still enjoyed watching Kenji and Garnet discover clues and solve the unusual in-pack murder.

Wild Embrace is another great addition to the overall folk lore of the Psy-Changeling world. The stories are self-contained, and not part of the overarching storylines, yet give insight to the minds and hearts of the Psy-Changeling-Human world. A wonderful read for fans of this amazing series.

In a deep-sea station, Tazia Nerif has found her life’s work as an engineer, keeping things running smoothly. But she wants nothing more than to break down the barrier of silence between her and her telekinetic Psy station commander…

Still raw from being burned by a dominant female, wolf changeling Felix will never again risk being a plaything. But for dominant leopard Dezi, he’s the most fascinating man she’s ever met. She just has to convince this gun-shy wolf that he can trust the dangerous cat who wants to take a slow, sexy bite out of him…

Seven years ago, Kenji broke Garnet’s heart. Now the wolf packmates have to investigate the shocking murder of one of their own. And the more Kenji sees of the woman Garnet has become, the deeper he begins to fall once more. But even his primal instincts are no match for the dark secret he carries…