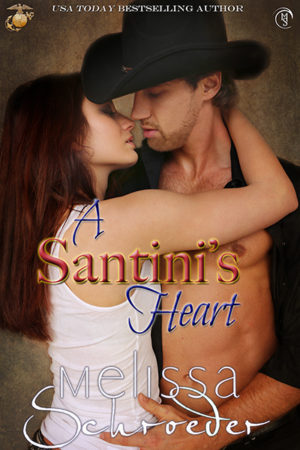 “Out here,” he said, just loud enough for her to hear. She followed the sound of his voice to the back porch. When she caught sight of him, she stopped and stared.

The heat of the day had apparently gotten to him also. He stood on the porch, holding a bucket of water, but that was not the part that had captured her attention. He had no shirt on.

The man was trying to kill her. She had seen him without his shirt before, but this was different. Sweat glistened on his back as he lifted the bucket high above his head and tipped it over. Water sluiced over his sculpted muscles.

Holy Magic Mike. He turned and shot a smile over his shoulder. Life was not fair. Or someone up in heaven had a sick sense of humor.

“I can fill a bucket for you too.”

There was no mistaking that flirtatious tone. Okay, that was taking it too far. The man knew what he did to women. Standing there wet, dripping with sensuality and almost nakedness, there was no way he didn’t know how sexy he was.

She would not show it. She was good at hiding her feelings, and she could do it now.

A clap of thunder sounded overhead, as if on cue. He laughed and stepped closer. She should have known what he intended to do, but her brain was still on the fritz from seeing him go all Channing Tatum on her. He grabbed her hand and yanked her out of the house and onto the porch just as the sky opened up. Rain poured down on them.

“One of these days, I am going to kill you,” she shouted over the rain.

She snorted. It was insane. They were both standing there in the rain, as if nothing else was going on.

“We need to get inside.”

“Yeah, got any towels?” she asked.

He pointed at the table. They were soaked from the downpour.

“How was I supposed to know?”

“The thunder, the clouds?”

He shrugged and grinned at her. She knew that silly little smile worked on women. She had seen it with her own eyes. Hell, she had felt it herself. When a Santini man smiled at a woman, it was like the entire world faded away leaving just the two of them. It should be stupid.  The rain was still drenching them, and they both just kept standing there. But somehow, she couldn’t get herself to move.

Then, his gaze dipped down her body, and back up. She knew without looking down that her clothes were stuck to her body.

“Get a gander, Santini?”

Carlos took his time bringing his gaze back up to meet hers. “Yeah.”

She rolled her eyes as she walked back into the house. Standing around with a wet Carlos in the vicinity wasn’t a good idea. He followed her into the house and caught her by the wrist. He didn’t have to yank hard to get her. She fell against him.

“What do you think you’re doing?”

She had tried to sound outraged, but instead, she sounded breathless. Anticipation curled through her as her pulse felt like a stampede of stallions.

“I had some thoughts about our fight earlier today.”

“That we wouldn’t have had it if I had just given in.”

She frowned. “What the hell are you talking about?”

He shook his head, then lowered his mouth to hers. The moment their lips touched, she melted. She had dreamed about this for months, thought about it the first time she had seen him standing at the fence waiting to learn to ride. God, he was delicious. Like sugar-coated funnel cake on a hot summer afternoon delicious. He slipped his hands down to her waist as she slid hers up to his shoulders. As he urged her closer, he deepened the kiss, tracing the seam of her lips with his tongue. She willingly opened her mouth and took him inside.