All the Wounds in Shadow 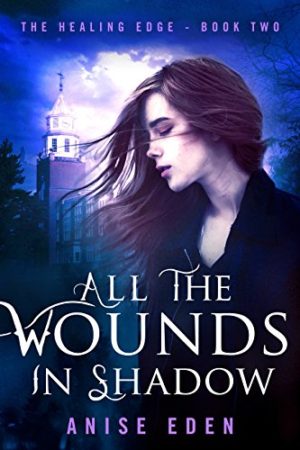 His features grew soft with affection. “You never stop surprising me, Cate.”

I felt my cheeks redden again. It was time to change the subject. “Let’s talk about something nonserious for a change. It sounds like it’s going to be all serious all the time once we get where we’re going.”

“Good point. Let’s shorten the road. What would you like to talk about?”

Suddenly, I couldn’t think of anything but the mission, which I knew we couldn’t discuss further until we arrived. I racked my brain. “Twenty Questions is kind of a road-trip game, isn’t it?”

“Hmm.” For the first time that morning, he appeared upbeat. “I should warn you, I’m really good at that game.”

At the prospect of playing a normal, lighthearted game with Ben, happiness flitted through me like a tiny fish. Still, I shook my head at his overconfidence. “Is there anything you aren’t good at?”

“Plenty of things,” he said, “but absolutely no advantage will accrue to me if I tell you what they are.” A smile played across his lips. “Ladies first.”

We played a few rounds. It was obvious that we were trying to make it easy for one another. I was pleasantly surprised to find that Ben took the same approach to games that I did—that their purpose was fun, not serious competition. Still, after I guessed his Jaguar in eight questions and he guessed Vani in six, it was starting to get a bit ridiculous.

I glanced around for inspiration. It wasn’t hard to find. “Okay, I have something. Go ahead.”

My mouth fell open. “You know, being telepathic is the kind of thing you’re supposed to disclose to the person you’re dating!”

“Not telepathic, just observant.” He nodded at my hand. “You looked down at your ring right before you said you had something.”

I gave him a lengthy glare. Then I put some real thought into my next answer. “Okay, ready.”

“Is it bigger than a breadbox?”

Ben glanced in the rear view mirror, presumably to make sure that Vani was asleep and Asa and Eve still had their headsets on. Then he asked, “Is it the incredibly distracting woman who’s wearing your ring?”

I pressed my lips together. “You know, for someone who’s so fond of following rules, you’re certainly playing fast and loose with Twenty Questions.”

“You’re right, I apologize,” he said, with no sincerity whatsoever. “Give me one more chance. How many questions do I have left?”

As much as I was enjoying Ben’s playful side, I tried to look stern. “Seventeen.”

“All right.” He frowned in exaggerated concentration. “Is it a mammal?”

“Hmm.” He rubbed his jaw and murmured, “Is it the woman I kissed last night—the one I can’t stop thinking about kissing?”

A fresh blush splashed across my face as I recalled our prolonged session on my couch. “You can’t stop thinking about that either?” I whispered.

His smile was triumphant. “So I guessed right?”

“No, you did not guess right!”

My breath caught in my throat as Ben’s eyes flashed up and down my body like a sultry searchlight. “You’re not even playing the game at this point.”

“You’re right. I’m sorry. In my defense, though, it’s hard to concentrate on Twenty Questions when you’re sitting this close to me.”

I tried to disguise my stirring arousal with an eye roll. “Says the master of self-control.”

“Only when I’m able to concentrate fully on that task,” he admitted with a crooked grin. “Right now, at least half of my brain is occupied with driving.”

“I see.” It occurred to me that this information might come in handy sometime. “I’ll have to remember that.”

He shot me an inquisitive look. “Tell me what the answer was, at least?”

I only kept him in suspense for a minute. “It was Tank, the dog from your old Marine Corps unit.”

“Tank!” He leaned back, stretched, and tucked his free hand behind his head. “Well, I was in the right neighborhood, anyway.”

I was in the same neighborhood as a Rottweiler? “Meaning what, exactly?”

“Well, Tank used to kiss me all of the time,” Ben said. “Of course, his kisses were more slobbery….”

Choking back a laugh, I warned, “I’d stop talking right now if I were you.”

3 responses to “Sunday Snippet: All the Wounds in Shadow by Anise Eden”