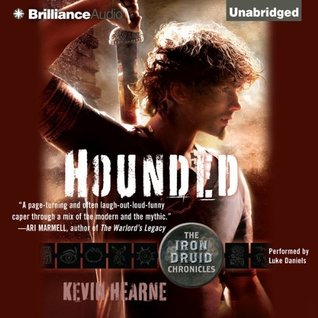 The Iron Druid Chronicles follow the life of a 2,000+ year old Druid named Atticus O’Sullivan (not his given name, but most recent alias). Atticus is the only remaining Druid from a time long gone by, hiding out from Angus Og, the Celtic god of love and youth, who wants to kill Atticus for a perceived wrong-doing. In Atticus’s world, every deity, Fae, witch, and paranormal creature is very real. Posing as a twenty-something new-age bookstore owner, Atticus has remained hidden in the East Valley/Tempe region of Arizona. However, powerful Fae are playing a game of politics, and Atticus finds himself in the center of their machinations.

The Iron Druid Chronicles were recommended to me by a couple of my urban fantasy-audiobook friends, and I am happy to report that so far, it’s a winner. Although I was expecting something along the lines of either the Mercy Thompson series or the Dresden Files, I was pleasantly surprised to discover a unique and interesting mythology. This first offering, Hounded, serves to develop the extremely detailed mythology and introduce what I assume with be the key players throughout the series. The primary focus of the story is the impending battle between Angus Og and Atticus, with each step serving to share more of the Iron Druid’s world. Although I would have like a little bit stronger story, the fresh and unique mythology kept me more than interested in the tale. Additionally, I enjoyed Googling the different Celtic deities to find out more about each and add that knowledge to the context of the story.

The story (and series) is read by Luke Daniels, a new-to-me narrator. Overall, I felt he did a solid job. His performance as the narrator/Atticus is spot on; a youthful voice, tempered by years of knowledge and wisdom. I also found his voice for Atticus’s more-than-a-dog, Oberon, perfect with a gruffness one would expect from a dog that can (mentally) speak. Sometimes I found Atticus a bit too calm, but not negatively so. Daniels has a nice range for both female and male, human and non-human characters.

Overall, Hounded is a good start to an interesting UF series. I enjoyed the world development and character interaction. I really liked Atticus: a mix of wiseman, impish boy, full of courage and charm. I loved his relationship with Oberon, although sometimes it’s like a father-child relationship, which made a scene at the close of the book a bit weird for me. The political machinations of the Fae were intriguing, but I hope for more story in the following books now that the world is established.

13 responses to “Listen Up! #Audiobook Review: Hounded by Kevin Hearne”