Audiobook review: The Curse of the Tenth Grave 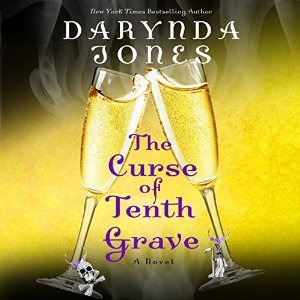 After spending the previous book lost in Sleepyhollow with no memories, Charley is back at home and working as a private investigator. Meanwhile, she’s trying to learn more about the three gods sent to kill her daughter, and if Reyes, her beloved husband and the son of Satan, knows he was formed from one of those gods.

For those who have followed my reviews, you know that I’ve had a love/hate relationship with the Charley Davidson series. I felt the books became too confusing, with too much going on and some huge inconstancies over the course of the series. Another big issue I’ve always had is the lack of personal growth in Charley and the fact that she would make the same mistakes over and over. So I was a bit surprised that I actually really enjoyed The Curse of the Tenth Grave. It didn’t feel as convoluted as several of the previous titles. Charley was back to solving insolvable crimes, and there weren’t a dozen storylines running at once. But the biggest improvement is that there was substantial relationship and character growth for Charley and Reyes. Things like open communication, helping one another, and trust. Things that should have happened books ago. Additionally, this book cleared up a lot of the mythology, as well.

What I didn’t care for was the apparent changing of the rules, again. The little inconsistencies that drive me insane about this series. The convenient way the rules and mythology change to suit the current storyline. Details forgotten or adjusted to fit. Which then got me thinking about open storylines that never closed the loop, or if they did, I missed it. This series is far from perfect when it comes to the little details; however, when the story is strong, as this one was, those type of little issues have a way of melting into the background. So I was able to forgive and move on because I was so engrossed in the tale.

Once again, humor is central to Charley’s interactions with all she comes into contact. Lorelei King’s performance of Charley only enhances the wit and humor in the story and strengthens Charley’s narrative voice. Ms. King raises the level of the storytelling and also allows me to forgive and move past some of the small issues that I have from time to time.

As a longtime reader/listener to the Charley Davidson series, I found The Curse of the Tenth Grave highly entertaining and a bit emotional. I fell back in love with Charley and Reyes. I enjoyed watching their romantic journey grow and move forward to a more healthy, genuine place. Even more, I loved how they would and will do anything to protect their daughter. This story is a must for fans of the series, but only if you are up-to-date in your reading. Do not skip books in this series; too much happens in each.

12 responses to “Listen Up! #Audiobook Review: The Curse of the Tenth Grave by Darynda Jones”