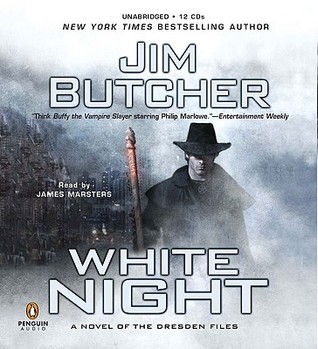 Opening nearly a year after the previous book, Harry and fledgling apprentice Molly Carpenter are investigating a rash of suspicious murders at the request of and along with Karen Murphy. Someone or something is killing off practitioners of magic, some with barely any perceptible power. Unfortunately, it looks like Harry’s half-brother, Thomas, may be involved. As Harry digs deeper, he finds layer upon layer of subterfuge and evil.

I think White Night may be one of my favorite books in the series. First of all, the story returns back to the series roots, bring back into the mix gentleman Johnny Marcone, Chicago’s notorious underworld boss. I’ve always enjoyed Johnny’s dark character. He’s not a good man, but he still makes noble gestures and has a heart under the slick surface. His actions are always made with a self-serving endgame in sight, but he also has secrets that motivate him in unexpected ways. Events in White Night suggest we will see more of Marcone in the titles ahead.

Second, I found the balance of dark and light within and around Harry, ideal. The book’s mix between action and storytelling emphasizes this underlying struggle that Harry faces every tale. With the shadow of a manipulative fallen angel inside of Harry, I constantly worry that a point will come when Harry can no longer resist the temptation and take up the coin, bringing power and possession with it. I found this particular storyline extremely exciting and engaging this time around.

There are other characters from the past that resurface in White Night, which was both interesting and frustrating. Interesting was the plot and subplots involving the characters. However, I was frustrated because I couldn’t always place the characters, only that I know I’d heard of them before. Yet, Mr. Butcher weaves a strong tale, keeping me just enough in the loop as to not worry about the past so much.

As always, James Marsters works his own magic, bringing Dresden to life with his top-notch performance. However, this time around, I accidentally listened to the book at 1.5x speed instead of my usual 1.25x speed. I thought things sounded a little off once and a while, but by the time I realized why (the faster speed), I’d grown used to it and now prefer it.

White Night is another amazing tale in what has become one of my favorite series. The balance between serious and humor, light and dark, action and thought has reached near mastery, and I look forward with much anticipation to where Harry Dresden will end up on his future adventures.

My Rating: A-
Narration A