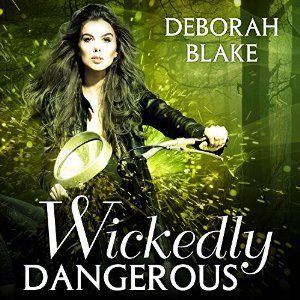 Barbara Yager is one of the Baba Yaga, a human, nature-witch of sorts. She was summoned to Clearwater County by an elderly Russian couple whose granddaughter was kidnapped. Right from the start, Baba realizes that otherworldly forces are at work, and that there is a menacing connection between the proposed hydro-fraking of the land and the missing children.

Liam McClellan is the hardworking sheriff whose job is on the line because of the missing children. He knows there is something unusual, something more, going on, but is he ready to accept the truth?

Wickedly Dangerous is the first book in an interesting UF romance series centered on the Russian mythology of the Baba Yaga. I enjoyed the premise of the book, taking a modern day spin on the witch who lived in a hut that walked on chicken legs. Baba’s powers are impressive, but she has limits and rules, which makes the entire situation a bit harried when she can’t take the necessary actions to right the wrongs.

I don’t know if it was the narrator, writing, or both, but the book seemed to have a fairytale quality when the subject matter warranted a gritty, urban fantasy tone. I couldn’t always put my finger on it, but it didn’t always suit my tastes. I liked the storyline, but the almost whimsical quality turned me off. The language was often flowery and overly descriptive with odd comparisons.

“His hands clenched on the folder until the papers inside crunched like dry bones in an abandoned graveyard.”

“The drowsy coals flashed into sudden wakefulness, flames shooting upward as if to meet the stars halfway. Baba’s heart roared with matching fury and pain, it’s intensity catching her by surprise. One rare tear fell onto the fire and evaporated like a stillborn dream of happiness.”

And then there was the awful part when the author compared a luscious roasted chicken to a Vegas show girl after a day in the sun. Just ew.

Unfortunately, between the off descriptions and the constant witch hunt against Baba and Liam, the book began to wear on me, and I just wanted the issues resolved. I understand that witch-hunt mentality and type of behavior would happen in real life, and I don’t disagree with the direction of the Dunville residents, but it was brought up too often, and I needed it to end. And the more I listened to the book, the more disappointed I was with the exaggerated stereotypes and problems.

I enjoyed Romy Nordlinger’s performance as Baba, with her slight Russian accent and often frustrated attitude. However, I found that overall, her reading was too cheerful for the seriousness of the subject matter in the book. I like the narrator yet, it didn’t suit the story at all times.

In the end, I found that Wickedly Dangerous started with a promising bang, but ended with a fizzle. I liked most of the story, but there were too many distractions to keep me interested until the end.