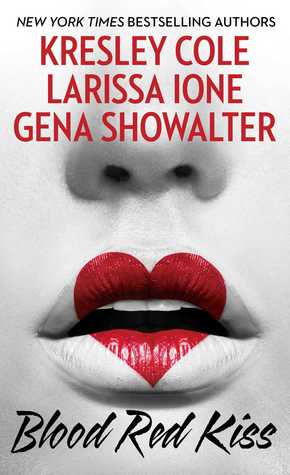 The first title in the Blood Red Kiss anthology is a re-release of the first Immortals After Dark (IAD) title, “The Warlord Wants Forever,” which was originally released in 2006, and I read and reviewed in January 2011. This was taken from my original review; I did not re-read the story.

The pace of the story is quick – which makes sense giving the shorter, novella-length format. Myst and Wroth’s romance is full of tension, violence and passionate sex. At one point, Wroth claims a sacred prize belonging to Myst which gives him complete and utter control over her. He abuses this power, and although he doesn’t use it to rape her, he forces her to face her lust and desirous feelings for Wroth.

Overall, a promising start to the IAD series. I love the snarky lines and smexy males.

“Forsaken by Night” is the second offering in the anthology. It is a brand new, long-awaited MoonBound Clan novella from Larissa Ione. It features Lobo, a vampire loosely associated with the MoonBound Clan. Lobo was banished from Moonbound over twelve years ago after he shifted to resemble another vampire, a rare and much-feared power Lobo possesses as a skinwalker. Lobo’s constant companion is a smarter-than-average wolf Tehya, who continually projects the image of a specific woman into his mind. When a poacher fatally wounds Tehya, Lobo commits the ultimate taboo and shifts to look like Moonbound Clan chief, Hunter, so he can enter their territory and get the help Tehya requires to survive.

Tehya and Lobo make an interesting, unique couple. They fit together well, after spending 12 years together as man and wolf. The author makes it clear that while neither felt anything sexual toward the other in those first years, they had formed a bond that was more than wolf and man and definitely not master/pet. Their attraction is mutual and immediate, thanks in large part to Tehya’s abilities to mentally connect to Lobo when she was a wolf. I liked their loner-by-nature, yet perfect as a pair chemistry.

Overall, Forsaken by Night was a real treat for Moonbound Clan fans like myself. I had series love for the series and interesting mythology after the first two books and have been waiting for more from this series. I hope this means Ms. Ione will be turning out more soon!

The final story in this offering is “Dark Swan,” a new novella in Gena Showalter’s  Otherworld Assassin series. I’ve never read any of the titles in the series, and was glad that the story was written to work well as a standalone. However, that doesn’t mean I wasn’t a little overwhelmed by the incredibly detailed and complex mythology Gena presents in her story.

The prologue introduces readers to the Swan sisters, alien-human hybrids developed in a lab in an effort to create the ultimate super soldier. Trinity is firstborn and most beautiful, Jade is a mental mess, and the youngest, the darkest, Lilica, can control humans with her voice. They were experimented on and treated awfully.

Fast-forward to present day when Alien Investigation and Removal agent Dallas Gutierrez has a premonition that Trinity, now the queen of the Schön (a monster that has sex to spread the Schön disease or it will eat away at her, turning her into a zombie), is going to start causing series trouble. Dallas finds himself attracted to and bonded with Lilica, and he intends to use her in order to capture and destroy Trinity.

“Dark Swan” was quite a bit of a wild ride for me. The numerous alien races and hybrids were a lot to take in, as were the many rules of the world. At times, I felt like the author just made up new powers and rules for the powers as she went along. Regardless, “Dark Swan” was a fun read, and definitely piqued my interest for the series on whole. Dallas and Lilica may have been forced together due to circumstance, but their mating felt like it was written in the stars, so to speak. The author makes a great case that they fell in love rather than the bond just bringing them together. The constant state of arousal in both, along with their banter, which gave way to compromise and trust, made for an entertaining read.

Blood Red Kiss is a powerhouse anthology from three masters of paranormal storytelling. The stories are entertaining, exciting, and sexy. The publisher has also tossed in some background info on the IAD Series and included a silly group text of the three authors procrastinating while under deadlines.

In Kresley Cole’s celebrated story “The Warlord Wants Forever,” the first in her scorching Immortals After Dark series, vampire warlord Nikolai Wroth will stop at nothing to claim his Bride, the one woman who can make his heart beat again. But can beautiful Myst the Coveted accept an enemy vampire as her own?

Tehya has spent the last twelve years as an accidental wolf, but is truly a vampire at heart. When she gets injured, Lobo sneaks her inside MoonBound’s headquarters and nurses her back to health…with potentially deadly consequences. Desire collides with danger in “Forsaken by Night,” a MoonBound Clan novella from Larissa Ione!

In Gena Showalter’s Otherworld Assassins novella, “Dark Swan,” Lilica Swan isn’t quite human or otherworlder; she is the best—and worst—of both. She is willing to do whatever proves necessary to save her sister from the seductive and deadly Alien Investigation and Removal agent, Dallas Gutierrez, even bond her life to his…effectively wedding him. But without consummation, the bond will fade. Can Dallas resist his insatiable desire for the powerful beauty? Or will she lead to his ultimate downfall?

Reviews in the Series:
Immortals After Dark
MoonBound Vampire Clan