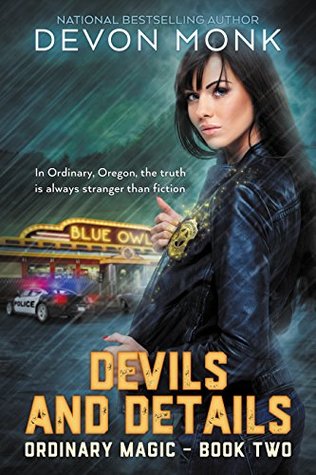 Devils and Details is the second book in the fascinating world of Ordinary, Oregon.  Though Una and Gikany are a bit split on our rating, suffice to say we both liked it and look forward to more.

****If you haven’t read the first book (Death and Relaxation), this review may contain spoilers.  Read at your own risk – you have been warned!****

Gikany and Una love this world.  The varied paranormal creatures intermixed with gods and humans allows for a rich cast of characters.  In this installment, we see and learn more about the world’s mythology, while Delaney tries to find lost god powers, heal her broken heart, and find a murderer.  Oh, all while keeping humans in the dark about their more otherworldly friends and neighbors.

The feel of the novel bounces between light-hearted and serious.  It’s a nice mixture of both, though it is not quite as humorous as the previous novel.  It could be due to the nature of the murderer and what danger he poises.  Not to mention, only the killer’s identity is revealed by the end of the book, but his story is not over.

In the previous novel, Ryder (Delaney’s never-ending crush from her youth) and Delaney have their long awaited fling – only to have it come crashing down.  Ryder was swathed in mystery and we find out through the course of Devils and Details who his really is and what he does for a living.  Through the course of this novel, Una sees Ryder apologizing for being an absolute jerk, several times over.  It is plain that he loves Delaney and realizes he made the biggest mistake ever.  However, Gikany feels that Ryder crossed a line – one that no apology can make up for considering how he ended things with Delaney.  Gikany holds out hope that Delaney will end up with someone better, while Una is waiting for Ryder to stop apologizing and start redeeming himself.  Though, to do that he would need to start actually listening to Delaney and her advice…

The characters are so vibrant in this series – it’s what makes the series work.  In particular, we love the relationship between Delaney and her sisters.  All three are working as the law in town to keep people safe (and blissfully unaware), while also ensuring the gods enjoy a little R&R as the monsters make a living.  We did find it an odd note when Delaney noted something off about her sister Myra and waited to talk to her about it.  The camaraderie between the three sisters is so strong, we thought she would have acted sooner.  We were sad that Jean was not as prominent in this installment, but hope to see more of her in the next one.

We continue to like the Ordinary Magic series and look forward to more.  Though Gikany thinks Delaney could and should do better than Ryder, Una (the hopeless romantic) is waiting for Ryder to redeem himself.  Not to mention we can’t wait to see how all the folks in Ordinary are doing and if Delaney can save her town from the impending war.

Gikany:  B- Liked It, but had a small issue

Together:  B Liked It

Caught between the devil and the deep blue sea…

Police Chief Delaney Reed is good at keeping secrets for the beach town of Ordinary Oregon–just ask the vacationing gods or supernatural creatures who live there.

But with the first annual Cake and Skate fundraiser coming up, the only secret Delaney really wants to know is how to stop the unseasonable rain storms. When all the god powers are stolen, a vampire is murdered, and her childhood crush turns out to be keeping deadly secrets of his own, rainy days are the least of her worries.

Hunting a murderer, outsmarting a know-it-all god, and uncovering an ancient vampire’s terrifying past isn’t how she planned to spend her summer. But then again, neither is falling back in love with the one man she should never trust.

Reviews in the Series:
Death and Relaxation by Devon Monk (Ordinary Magic #1)

2 responses to “Review: Devils and Details by Devon Monk”