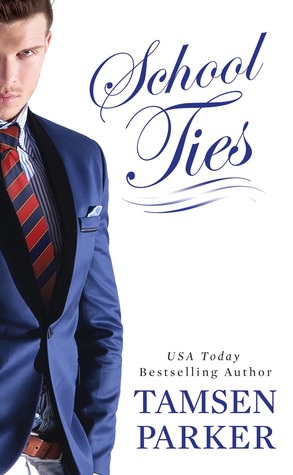 When I started reading School Ties by Tamsen Parker, I thought I was going to have to tap out about halfway through. Erin is a math teacher at a private boys’ school. She has the hots for one of her students, but does nothing about it (good girl, Erin). Since it’s a dual POV story, we find out Shep (nickname) is seriously crushing on her, too. And **something** happens almost immediately after Shep graduates.

But I didn’t tap out. I did have the heebies (um, hello?!? Teacher), but got over them pretty quickly once I hit the second half of the book. I’m glad I trusted Ms. Parker to be sure her readers knew if there was something with extra squick factor. Readers also need to be aware of a miscarriage.

Both Shep and Erin had HUGE phases of growth through the title. I was impressed at how realistic things were and ended up cheering for them to get together.

Erin is a bit like me, I’ll admit. She has this huge sense of propriety while she’s working, and hides a curiosity for BDSM—in a collection of novels underneath her bed. Her positive outlook—although it gets a workout during the story—seems to be one of her strengths. Her responsibilities are to herself and to Hawthorne, the school where she teaches. Her memories of being on campus keep her rooted there, as she grew up the gypsy lifestyle. She endures several situations during the story to get her HEA. And OMG! I was totally cheering her on in several places. I adored her strength and her ability to move on. However, she does allow past experiences to cloud her vision when it comes to Shep a few times.

Shep is pretty much the polar opposite of Erin. He’s heaped with self-placed responsibility from the get-go due to his family and financial situation. Also, at school, he’s a leader in both the academic and athletic communities, and needs to live up to those expectations. When he graduates and goes off to college, we end up seeing the real Shep in brief glimpses. He’s the perpetual do-gooder. Seriously. He manages to fall into an experience that helps define his life, and readers are only treated to glimpses and shadows of his three years of college—but it’s enough. Broody, and Alpha, Shep has a plan. Oh. Did I mention he’s an artist, too? I melt.

I wish I could say things were easy for Shep and Erin when they finally got together. Ghosts from the past threatened to rip them apart, and even fantasies of the future couldn’t smooth over the rough spots totally. But how interesting would a story be if everything were sunshine, lollipops, and rainbows?

Tamsen Parker is still one of my one-click authors, and this is her traditional publishing debut. Her self-published Compass series has another title releasing December 12, 2016. SOOO excited!

Erin Brewster is nervous enough on her first day of teaching at Hawthorn Hill. But the way Zach Shepherd looks at her with his dark and dreamy blue eyes really throws her off her game. He simply has to walk past her to send her heart racing. Although he’s eighteen and a senior, he’s still just a student—and very off limits. To let her eyes linger over his body, to fulfill her fantasies would be more than inappropriate. It would be career suicide.

Three years after his graduation from Hawthorn, Shep has returned as a member of the faculty—and he hasn’t forgotten his favorite teacher, the prettiest woman he’s ever seen. When they finally have a chance to get to know each other, they realize they share a common interest: kink. In fact, Shep has learned a lot about the subject during his time away and is ready to teach Erin a thing or two. He’ll soon have her begging to be held after class.

As their relationship comes under scrutiny, the ties that bind Shep and Erin may begin to fray. But some bonds grow stronger under pressure…