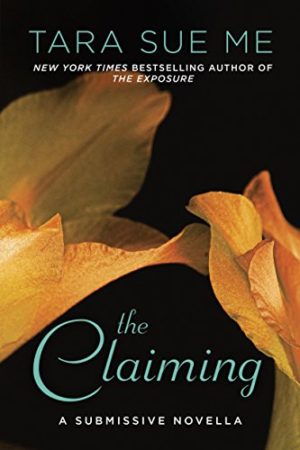 The Claiming
Author: Tara Sue Me
Reviewer: VampBard
Rating: B+

Before I even start, readers need to be warned that the last thirty-ish minutes of reading on this story is a preview of The Exposure, releasing October 4, 2016. I did NOT read the preview, folks. I resist the urge to do that—especially since you can come back on release day to read my thoughts on Meagan and Luke’s story.

I was really geeked to get back to Cole and Sasha. I mean, Sasha has had such a difficult row to hoe after all that stuff… Anyway, it seems we finally get to see her HEA here…even though it seems as though we may have already seen it.

Learning more about the super hot and super British Cole Johnson’s roots made this read for me, to be honest. Catching a deeper glimpse of his past was a bit telling for me, to be honest. My first thought was, “Is this type of thing what makes a good Dom?” But naturally, I debunked my posed question. Totally not required. It does, however, make for a good story, and naturally readers always want backstory. Maybe that’s just a me thing…

While The Claiming is just a 92-ish page novella, it’s a great way to reconnect with Cole and Sasha—and see where they are now. We get some reconnection with Nathaniel and Abby, as well as Daniel and Julie which makes my over-arching plot heart happy. Readers of the Submissive series will definitely want to pick up this title, as it’s a great glimpse at how far Sasha has come. And, if you can’t wait for The Exposure to release in like a month, there’s a taste at the end.

Submitting is just the beginning…

Sasha Blake never thought her emotional wounds would heal—that they were a part of her just like her physical scars. But that was before Cole Johnson’s boundless love and overwhelmingly sexy control set her free, unleashing a confident side that she never knew she had. He’s more than just her Master; he’s her world. And she’ll do anything he asks…

Cole’s days of restless wandering are done—he’s found everything he needs in Sasha. Now, it’s time to make it official. When his childhood home in England goes up for sale, he realizes the old estate is the perfect place to claim Sasha as his own, and the ideal opportunity to show her just how much she means to him.

As Sasha, Cole, and their closest friends from their Partners in Play community descend on the British countryside for a titillating adult vacation, the submissives and Dominants alike will test their boundaries—and have an adventure none of them will ever forget…

One response to “Review: The Claiming by Tara Sue Me”