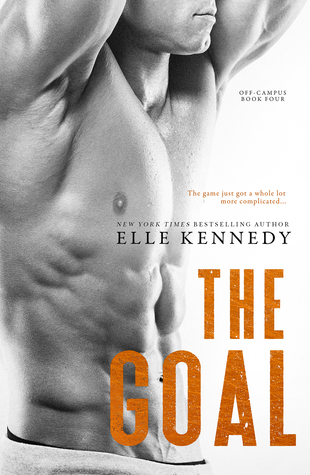 Everyone who has followed the Off-Campus series knows about the huge bomb dropped at the end of book three, The Score. With the biggest of all spoilers already out there, where did Kennedy have to go?  Everyone already hated Sabrina James; how do you make her sympathetic?  Everyone already loved gentle, pink-aproned John Tucker; how do you hoist someone like Sabrina on him and justify it? Leave it to the skill of Elle Kennedy to make it work.  I think she knew right where this story was going way back in book one, The Deal.

The timeline in The Goal overlaps The Score, Dean and Allie’s story, running nearly parallel and up to the point of the epilogue in book two, The Mistake.  Significant details in that installment are significant in this one as well, we just get to see them from other perspectives. The expansion gives more depth to both books.

In The Goal, we learn about Sabrina’s motives and how her life has shaped the person who has had venomous interactions with Dean.  She becomes sympathetic as soon as we see her in her home environment. The reader is rooting for her before she knows it.  Like Tucker who sees through her hard shell of independence, we know she’s hiding a soft, vulnerable interior.  In fact, I wanted to tell Dean, who is my least favorite of the four roommates, to pull his head out.  Given his stellar fall into stupidity in The Score, he’s the last person who should be passing judgement on others. Thankfully, she has Tucker.

How did this Texas born southern gentleman, who loves his mother and respects women, end up with an ice hockey scholarship in Massachusetts? What on Earth does he see in Sabrina James?  We get answers to these questions and more.

If there’s anything that Kennedy does well, it’s to write authentic emotions.  She always gets that spot on. Of course she does it with her trademark humor.  Kennedy seems to have a hilarious understanding that penises are as funny as they are awesome.  “Gee, I’m sorry Doris, but I never learned how to draw naked folks when I was getting shot at in ‘Nam!”  My single criticism, and I’m not sure you can call it even that, is a certain lack of conflict.  I was never worried about their connection. There are a lot of conflicted emotions, however, and that does carry the tension successfully to the end. When Kennedy wraps it up, I didn’t feel like I’d missed anything.  In fact, I was quite wholly content.

The Goal concludes the stories of the four Briar roommates.  I, for one, hope Kennedy continues the series and we get to read about smart, but introverted Fitzy next. There does seem to be the hint of that before the story is tied up in bows. *fingers crossed*

College senior Sabrina James has her whole future planned out: graduate from college, kick butt in law school, and land a high-paying job at a cutthroat firm. Her path to escaping her shameful past certainly doesn’t include a gorgeous hockey player who believes in love at first sight. One night of sizzling heat and surprising tenderness is all she’s willing to give John Tucker, but sometimes, one night is all it takes for your entire life to change.

But the game just got a whole lot more complicated

Tucker believes being a team player is as important as being the star. On the ice, he’s fine staying out of the spotlight, but when it comes to becoming a daddy at the age of twenty-two, he refuses to be a bench warmer. It doesn’t hurt that the soon-to-be mother of his child is beautiful, whip-smart, and keeps him on his toes. The problem is, Sabrina’s heart is locked up tight, and the fiery brunette is too stubborn to accept his help. If he wants a life with the woman of his dreams, he’ll have to convince her that some goals can only be made with an assist.

3 responses to “Review: The Goal by Elle Kennedy”