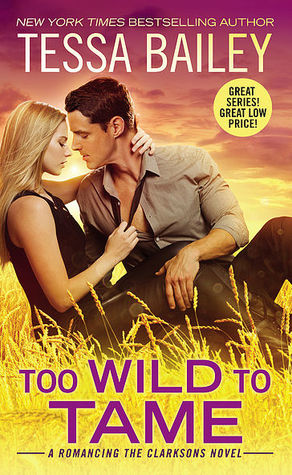 Please don’t tell Mr. VampBard. Seriously. My one-click finger is getting a serious workout as I find more and more authors with an awesome backlist to meander my way through.

Tessa Bailey is on the short list. Not kidding here, folks. I really wish I could provide you with some wonderful excerpts from Too Wild to Tame, but all the poignant ones are revelations during sexytime. They’re laced with innuendo and dirty-talking.

Definitely my cuppa. I’m pretty sure some of the text in this title were flame-thrower status.

Even if you haven’t read Too Hot to Handle, the first title in the Romancing the Clarksons series, you won’t be lost (I did read Rita and Jasper’s story, but I haven’t written a review… yet). While there’s a common thread—four siblings wending their way across the country from California to New York—each sib gets their own story. And their own HEA. They may not be pretty, and they may not be perfect, but the road to happiness is seldom an easy path to travel. These sibs have found their dearly departed mother’s diary—or a series of dialogues she has with herself on paper—about each of her kids.

As a parent of grown (and nearly-grown) children, I often think about how they perceive me as well as themselves. I’d love to think I’ve raised them to be self-assured and confident in themselves—that their persona isn’t merely a façade to cover up a shortcoming of mine. I think that’s a fear all parents have, to be honest. One of the best gifts a parent can give their child is the gift of their words. Letting them know how we really saw them. What we caught when they didn’t think we were looking… Enough mushy stuff.

We need to talk politics for a minute. No, I’m not going to endorse a presidential candidate, although that’s exactly what Aaron Clarkson does. He’s this supremely drool-worthy guy that has a silver tongue (pulling my mind out of the gutter…) and he uses it to endorse political candidates, assessing which demographic need his special brand of attention, and then launching an attack the populous never sees coming. He’s a love-’em-and-leave-’em kinda guy. Until…he falls from GRACE and has to fight his way back to the top. After all, with his powers of persuasion, this should be an easy task, right?

There’s a complication. The candidate’s daughter, Grace (see what I did there?). Aaron nicknames her hippie. It totally fits her free spirit and sense of social justice. Grace, honestly, is my kind of girl. I hope my daughters feel as empowered as she does. I truly adored her throughout the story. However, Grace’s past—her teen years—are cloaked in shadows and it’s never easy to bring those demons into the light. With her ability to see the good in people, she scares the hell out of Aaron. Yet, she doesn’t back away when it feels as though she’s been pushed away. She redoubles her efforts.

Too Wild to Tame is about the journeys of both Aaron and Grace. Their growth, their realizations, and some seriously hot dirty-talking. We’ve learned a lot about Peggy and Belmont, Aaron’s ‘unclaimed’ siblings through the first two titles in the series. Coming in April 2017 is Peggy’s story: Too Hard to Forget. Seriously. April needs to get here.

By day, Aaron Clarkson suits up, shakes hands, and acts the perfect gentleman. But at night, behind bedroom doors, the tie comes off and the real Aaron comes out to play. Mixing business with pleasure got him fired, so Aaron knows that if he wants to work for the country’s most powerful senator, he’ll have to keep his eye on the prize. That’s easier said than done when he meets the senator’s daughter, who’s wild, gorgeous, and 100 percent trouble.

Grace Pendleton is the black sheep of her conservative family. Yet while Aaron’s presence reminds her of a past she’d rather forget, something in his eyes keeps drawing her in. Maybe it’s the way his voice turns her molten. Or maybe it’s because deep down inside, the ultra-smooth, polished Aaron Clarkson might be more than even Grace can handle . . .

3 responses to “Review: Too Wild to Tame by Tessa Bailey”