Days of You and Me 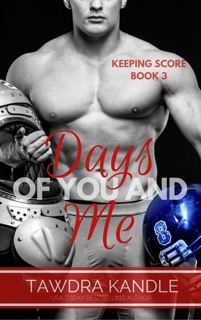 “You look like you’re deep in contemplation.” Quinn came into the room wearing hot pink yoga pants and a loose tank. My body went on full alert. “Penny for your thoughts.”

“Sorry, inflation.” I patted the cushion next to me. “I can’t take anything less than a quarter.”

She hesitated only a moment before she sat down just beyond the reach of my hand. “Oooooh, too rich for my blood. Is there a friends and family discount?”

“Depends. Which one are you?” I scooted a little closer.

She cocked an eyebrow at me. “Definitely not family. But I thought knowing you since we were in utero would let me qualify as a friend, at least.”

I reached toward her bare arm and ran one finger from her shoulder to her wrist. “At the very least. Isn’t there another category? How about . . . friends who are more than friends, and who I hope will be family?”

Her eyes went soft, and she shivered at my touch. “Family? Does that mean you want me to be like . . . your sister?”

I laughed. “I don’t think so. The feelings I have for you . . .” I cupped her wrist and slid my hand down until our palms were pressed together. “ . . . aren’t really sisterly. And they go beyond friendly, although you’ll always be my best friend. Forever.”

“Forever,” Quinn echoed. “So are you going to tell me what you were thinking about here, before I came in and interrupted you?”

I shrugged. “If I’m being honest, like we promised we would be . . . I was wondering how long until you come back to the East Coast.”

She laid her head against the back of the couch. “Yeah, I’ve been thinking about that, too.”

“And have you come up with any answers?” I tightened my hold on her hand.

“Maybe.” She glanced at me from under her eyelashes. “Since the book’s being published under a small press, at least initially, it’s coming out pretty quickly. The release party is in three weeks. I know Kara and Allan would understand if I left before then, but I also know they’d like me to stay. And honestly, I’d like to be here for it. I put a lot of work into this book, and I’m proud of what we did.”

“You should be.” I moved a little closer, releasing her hand to sneak my arm around her shoulders, drawing her closer to me. “I wish I could fly back out to be here for the party, too, but it’s going to be right smack at the beginning of training camp. No way I can leave the city, let alone the state.”

“I didn’t expect you to be there, but I appreciate the sentiment.” She smiled, and I didn’t see even a hint of reservation in her eyes. “However, once the party’s over and the book’s released, I really don’t have anything to hold me here. I was thinking of planning to be back east, in Richmond, in time for your home opener. What do you think?”

A combo of nerves and joy jumped in my gut. I wanted Quinn with me . . . and at the same time, I was terrified of messing it up. Still, nothing said we couldn’t continue to take things slowly. It would just be a whole hell of a lot easier when we were in the same time zone.

“I think that sounds perfect.” I risked brushing my lips over the top of her hair. “Have you been thinking about where you want to stay? And what you want to do?”

“The housing part . . . I’m going to suck it up and go stay down the shore for a while. That house is sitting empty, and I’m afraid that if I don’t go back sooner rather than later, I might never feel comfortable there. I need to reclaim it. Make some good memories again, you know? I’ll invite the girls to come down and stay with me for a weekend, maybe.” She lolled her head back to rest on my arm. “And if you’re a very good boy, I might even invite you up to stay with me when you have the time.”

“Baby, I’m really good at making happy memories.” I nuzzled her neck, breathing in her indefinable Quinn scent. “I’m down for that.”

“As for what I want to do, I might have an idea. Kara and I were talking in the kitchen tonight while we were cooking. She asked me what I was passionate about, and I came up with two things: writing and football. Because she’s Kara, of course she has a friend who was one of the pioneers among women who cover men’s sports. Her name’s Marla Smith Long—have you heard of her?”

I crinkled my brow. “Maybe. The name sounds familiar.”

“Anyway, a few years back, she launched an on-line news outlet that covers sports, particularly football, which is apparently her consuming love. Kara says she’s just expanding into a new angle, covering the human interest aspect of football players and other members of the team—the coaches, the GMs, owners and so on. It sounds like something I’d love to do, so Kara’s going to set up a meeting for us.”

“Wow.” I wasn’t sure if this was good news or not. “Would it mean staying in California?”

A slow smile spread over Quinn’s face. “That would make for a very long commute, seeing as her headquarters is in Washington, D.C.”

“Seriously?” My heart felt like it might thump out of my chest. “Babe, that would be excellent. Does it sound like what you want to do?”

She giggled. “Why do you think I’d bring it up if it didn’t? It sounds more than exciting. More like absolutely perfect—exactly the kind of writing I’d like to do, in just about the perfect spot. Oh, and I wouldn’t have to live in D.C.—since everything is online, I’d only have to go up there once or twice a month.”

I shifted, turning Quinn in my arms so that she was facing me more fully. “You said up. That implies you’d be living . . . south of D.C., right? Any particular city you have in mind?”

She rolled her eyes to the ceiling, sucking in her bottom lip. “Hmmm. I don’t know. I’ve always thought North Carolina would be a great place to live—”

Her words ended in a shriek of laughter as I tackled, tickling the spots I knew were her most vulnerable: on the sides of her ribs, just above her hips and the backs of her knees. Quinn curled into a ball, trying to get away from my fingers, and I took advantage of her position, pinning her shoulders to the sofa cushion as I held myself above her, my face close to hers.

“Where is it you want to live?” I hovered there, with my mouth a breath away from touching her.

She gasped, trying not to laugh, even though I could feel her trembling beneath me. “Ummm . . . Baltimore?”

Lowering myself a bit more, until the tips of her breasts teased against my chest, I skimmed my lips along her jaw. “Baltimore isn’t south of D.C., babe. You need to brush up on your geography.” I found the sensitive pulse just under her ear and flickered my tongue there. “Now where is it you want to live?”

She’d gone still, so silent that I could feel the thud of her heart in my own ribcage. When her lips parted, I heard the whisper of her answer float across my cheek.

“Wherever you are. That’s where I want to live.”

One response to “Sunday Snippet: Days of You and Me by Tawdra Kandle”