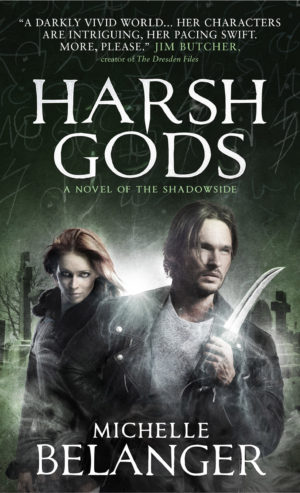 The lofty wall of the cemetery on my left began shrinking to meet the sidewalk again. About thirty feet ahead, it gave way once more to an eight-foot fence of lichened concrete. In the distance, the traffic light across from the Mayfield entrance blinked lazily in the frigid night.

I didn’t notice the people until they were right on top of me – – literally. There was scrabbling from high above, and then a tattered figure jumped down from the cemetery wall. She hit the sidewalk and rolled to her feet directly in my path. She was followed by a man who dropped with his full weight onto my back. He draped himself over my shoulders, wrapping his arms around my throat. I stumbled beneath the sudden burden, but managed not to fall.

“What the f**k?” I gasped. Power leapt to my fingers and I reached up to twist the guy off of me. The angle was wrong, and he clung with a strength that nearly matched my own – – a strength that wasn’t properly human.

“Choke him, kill him, make him bleed!” the woman sang in a ragged voice. She circled warily, and the amber glow of the blinking traffic light caught the glint of a blade in her hand. Long, slender, and serrated on one side, it looked like a fishing knife — meant for scales, but it would cut flesh just as well.

“Get off me!” I snarled. Straining to keep the man from locking his arms round my throat, I seized both of his wrists. With a sharp pivot, I smashed him into the wall. His shoulder hit the stones with bone-jarring force. It did nothing to slacken his grip.

“Hands to take. Eyes to see!” He spat the words wetly against my ear.

More of Whisper Man’s crazed vagrants. Great. These were probably the ones who’d gotten away. I wondered if they’d doubled back, and how long they had been following me. Stupid of me not to check.

While I struggled with her companion, the woman darted forward. She held the blade low, and if I didn’t get out of its way I was going to be singing soprano for a very long time. I could move fast when I wanted — a brief, inhuman burst of speed. It wasn’t something I could sustain for long, but it was d**ned useful in fights like this.

With a hundred and sixty pounds of dead weight hanging from my neck, however, even my speed couldn’t save me from her knife. I sidestepped, nearly losing my footing as I hit a patch of ice. It kept the knife-wielding woman from making a castrato out of me, but her blade still nicked me high up in the hollow of one thigh. It was such a swift cut that I only processed it as a brief flash of stinging heat. I teetered under the lumbering burden of the male attacker, controlling the motion in the next instant so his own ballast carried him thuddingly into the wall.

His head smacked into stone. The fingers of his left hand spasmed, and I used the opening to slip my own hand between his arm and my throat. He was skinny as a refugee, tendons and muscles cording over the knobby ends of his bones. Blue-white power leapt between us as I closed my hand round his wrist and jerked hard on his forearm. All the strength fled his fingers, and I tore his hand away.

Following through, I ducked forward, dragging him by that arm til I flipped him from my back. He landed on the sidewalk at the Fish-Knife Lady’s feet, the back of his skull hitting the concrete with an ugly crack.

I staggered backward, my left leg buckling suddenly beneath me.

Something wasn’t right. I didn’t feel pain, exactly, just a rushing sense of heat. It felt like water gushing down my skin.

Except it wasn’t water.

It was blood. Lots and lots of blood.