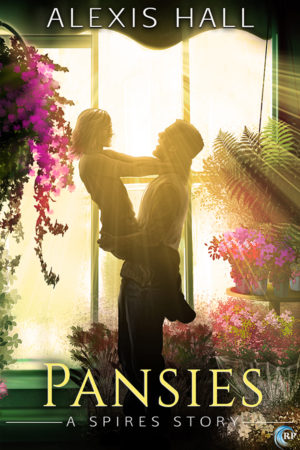 As has been the case with every story I’ve read by Alexis Hall, I find myself unable to write this review without a great deal of regard and admiration for both story and author. Mr. Hall is as thorough in Pansies as ever, writing in layers that are at once complex, philosophical, and literary, yet which are presented through the reassuring familiarity of sensation, sound, and color. I don’t think that there is a single, exclusionary truth within the narrative, but, rather, a unique kind of acceptance that is difficult to explain.

I don’t believe it’s exactly right to say that Pansies is the story of two people with a shared past, because it is so disparate in the experience of the main characters. The setting is the same, as are many of the key players, but the summation of its pieces has wildly different effects on Fen and Alfie. What I took from their respective histories is that the past is never a singular, weightless construct. It is as fractured as the lens of a kaleidoscope, each contributor’s perspective unique to every other. And as long as a single person’s shoulders are bowed under the weight of it, all are indefinitely accountable.

Perspective, in general, is another important component of the story, and how the same quantity of time can be experienced in entirely different ways by two (or more) people. Fen and Alfie both left South Shields, but there’s a significant distinction between “having to” and “wanting to.” Change is presented similarly, and might be viewed as the crumbling of foundations vs. the awareness of possibility.

One of my favorite things about Pansies is the enticement of the senses that seems to be present in all of Mr. Hall’s books. The smell of flowers and sex. The taste of wine and the salt spray of the ocean. A warmth strong enough to touch the chill that has nothing to do with the weather. And there are constant bursts of color—the red-black of butterfly wings, purple silk, and sea glass green—flung with all the moments they attend against grey skies. These are magical stories.

While Pansies does have its share of serious themes coursing through it, it is also fairly packed with humor—side-splitting, tears-streaming, cackling-out-loud humor. Alfie is a mess. There’s not much about him that isn’t a mess, and occasionally that manifests in truly bizarre and delightfully horrible situations that snowball into something even worse. And, if regaining control after one of these scenes wasn’t difficult enough, Fen’s reactions sent me right back over the edge every time. I absolutely couldn’t breathe sometimes, and I loved every second of it.

Overall, I completely adored Pansies. There’s just too much going on in the narrative to distill it into a tidy little bundle. When it comes to the past, there simply isn’t a universally agreed upon quantity of years that can erase the effects of harm done by one to another. And, while forgiveness might seem like an obvious goal, maybe acceptance (both of ourselves as well as others) is even more important. In addition, I was surprised and happy to see a reference to Ash from Glitterland, and I’m ridiculously envious of Alfie’s TVR Sagaris. There really aren’t enough good things I can say about the Spires universe, and, while Pansies can be read on its own, I enthusiastically recommend reading them all.

Alfie Bell is . . . fine. He’s got a six-figure salary, a penthouse in Canary Wharf, the car he swore he’d buy when he was eighteen, and a bunch of fancy London friends.

It’s rough, though, going back to South Shields now that they all know he’s a fully paid-up pansy. It’s the last place he’s expecting to pull. But Fen’s gorgeous, with his pink-tipped hair and hipster glasses, full of the sort of courage Alfie’s never had. It should be a one-night thing, but Alfie hasn’t met anyone like Fen before.

Except he has. At school, when Alfie was everything he was supposed to be, and Fen was the stubborn little gay boy who wouldn’t keep his head down. And now it’s a proper mess: Fen might have slept with Alfie, but he’ll probably never forgive him, and Fen’s got all this other stuff going on anyway, with his mam and her flower shop and the life he left down south.

Alfie just wants to make it right. But how can he, when all they’ve got in common is the nowhere town they both ran away from.

To celebrate the release of Pansies, one lucky winner will receive their choice of 3 ebooks from Alexis Hall’s backlist. Leave a comment with your contact info to enter the contest. Entries close at midnight, Eastern time, on October 15, 2016. Contest is NOT restricted to U.S. entries. Thanks for following the tour, and don’t forget to leave your contact info!