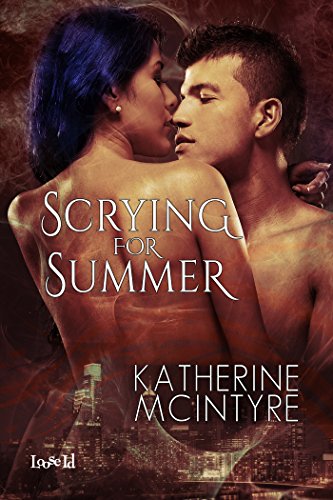 Jev was looking for an adventure, however she wanted the usual variety of stomping out nasty fae in the city as an enforcer of the Philly Coven. Instead, handsome as sin Liam O’Reilly shows up on her doorstep dropping news of the worst organization of fae they’d dealt with on the rise again. Except, he’s a traitor, an asshole, and the absolute last person she wants to work with.

However, the longer they work together, the more the fire between them burns, turning from rage and irritation into something primal. And as she gets to know the real Liam O’Reilly behind the charming smiles and sexy lines, he becomes so much deadlier. Because the protective, self-sacrificing man underneath his facade is just the sort she could fall for. 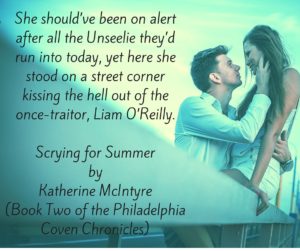 Liam stepped away from her desk and crossed his arms as he waited for Jev to respond, the silence setting his nerves aflame. The entire Coven building gave him the jitters—too much magic brewing in this place, and as he strode through he’d garnered more than a couple nasty gazes. Not like he hadn’t earned them. Anyone who knew his past discretions already juried him as a screwup. He couldn’t help but notice the steel in her gaze as the girl with the brilliant mind weighed her options. Since he’d last seen her, she’d changed her hair to a lush cerulean that even in the yellowed light of the library shone like a jewel.

Jev hissed out a breath, and her fingertips curled around the edge of the large book she clutched. Her full lips pursed as she met his gaze, a resigned and more than a little irritated look in her own.

“Fine, consider me baited.” She glared at him before using the desk to push herself up. “Spill.”

Liam shook his head, casting a glance around the spacious room. Jev had earned his trust through the blood of battle even if she hated his guts. However, the entire Coven of witches didn’t need to overhear the information he had to discuss. “Not here.”

Her brow quirked up. “Yeah, because I’m going to just follow you to a dark alley where you can kidnap and murder me?”

The comment hit him like a blow to the gut, but he didn’t let it show. After all, he’d had years of experience playing a part, and the cruel and unaffected act had become a specialty. “Pick a public place, and we’ll go.” Even here in the library, where the books far outnumbered the witches present, the press of gazes made him uneasy. He spent years with no allies, watching his every move and every phrase until paranoia had sunk into his veins. 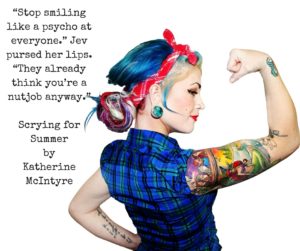 “Diner up the street. The owner’s a friend of mine, so if you decide to pull any hinky sh*t, not only will I kick your ass, but he will too.” She bent down to loop her messenger bag around her shoulder before tapping a finger on the desk. “No time like the present.”

Liam blinked in surprise at her quick-as-a-breeze pace, but rather than commenting, he jammed his hands into his pockets and gave her a nod. As they strode up the steps of the library, their footsteps echoing throughout the cavernous place, he cast a glance her way. “You know, if I was planning on ‘pulling hinky sh*t,’ I’d hope I was intelligent enough to nab you outside your home or something rather than escorting you out of your workplace with hundreds of dangerous witnesses.”

Jev let out a snort. “The jury’s still out on your level of intellect. After all, you signed up with Evil Incorporated in the first place.” 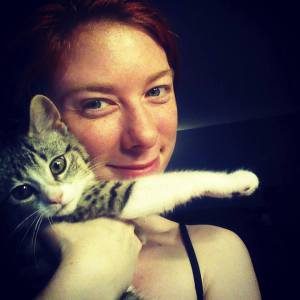 A modern day Renaissance-woman, Katherine McIntyre has learned soapmaking, beer brewing, tea blending, and most recently roasting coffee. Most of which make sure she’s hydrated and bathed while she spends the rest of her time writing. With a desire to travel and more imagination than she knows what to do with, all the stories jumping around in her head led to the logical route of jotting them down on paper. She writes novels with snarky women, ragtag crews, and guys with bad attitudes. High chances for a passionate speech thrown into the mix.