Audiobook review: All I Want 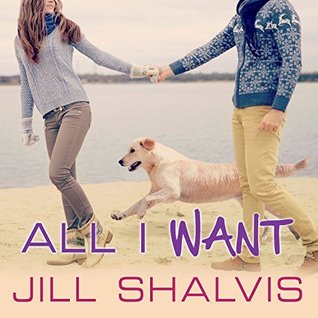 After a delay (library hold list), I was finally able to listen to All I Want, the final title in Jill Shalvis’s wonderful Animal Magnetism series. This time around, we get the romantic story for Zoe Stone, the eldest Stone sibling. Now that her younger brother (Wyatt) and sister (Darcy) have found love and moved out of the ancestral home they shared, Zoe is feeling a bit lonely, although she would NEVER admit that to anyone. Determined to make her own way, she’s decided to try a few blind dates to find some one-night companionship.

When one of Wyatt’s best friends needed an off-the-grid place to relax and recover from a work injury, Wyatt suggested he rent a room from Zoe. And now that he’s staying with her, he can’t stop thinking about how much he wants to get her into his bed. But Parker is hiding a number of secrets, like the fact that he’s not really a park ranger on vacation. The truth is far more dangerous, and Parker knows his stay is only temporary, so he can’t give into his feelings for Zoe.

Even though this is the seventh title in the series, Ms. Shalvis has done a good job of keeping each story fresh and unique, while sticking with the small town romance formula that works. All I Want had a bit more edge and suspense to it that previous titles due to the nature of Parker’s undercover work. I enjoyed the added action and mystery solving along side the romance.

As for the romance, I really liked Parker and Zoe. They shared an honesty that was touching and much appreciated. In a couple scenes, the raw dialogue was utterly heartbreaking. The author could have easily used Parker’s job and Zoe’s past to keep the pair apart, but the couple works through each bump in the road as friends fighting a strong attraction. In fact, the couple didn’t really hook up until about two-thirds through the book. It created strong sexual tension and gave me a emotional connection to the pair. I liked that the couple got to know one another and build the much needed trust before that acted fully on their lust. It works well for the pair and the story. However, I did have to cringe a little at the volume of sex they did have, once they decided to jump into bed. The sex scenes went on and on, back-to-back for a while there.

I have come to really enjoy Ms. White’s performance in this series. After seven titles, her voices have come to capture all that I know about and enjoy from the folks of Sunshine, Idaho. She adds emotion and uniqueness into each of her characters. Her performance is consistent, solid and entertaining. She has a good range of different female and male voices, only once and a while hearing similarities, but even then, she suits the dialogue to the situation and character.

All I Want is another delightful tale in a series about small town romances and a lot of silly/cute animal stories. Zoe and Parker’s romance had more of the same great chemistry and formula for success as its predecessors, with just enough differences to not be repetitive. This series has become enjoyable and a comfort – goto type series, especially as read by Karen White.

I can’t help but wonder if the series is truly over since poor Kell still needs to find love. But for now, it’s been a great run.

4 responses to “Listen Up! #Audiobook Review: All I Want by Jill Shalvis”