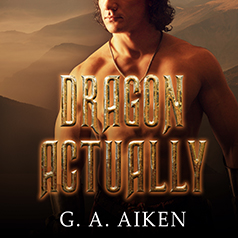 I have heard very good things about G.A. Aiken’s Dragon Kin series, so when I saw it was being release on audio by Tantor media, I jumped at the chance to review the titles. Dragon Actually, the first story in this paranormal/fantasy romance series is actually two books in one. The primary story, Dragon Actually, creates the settings and develops a world full of waring humans and powerful dragons. The second, short story, Chains and Flames, shares the backstory of two dragon characters we meet in the primary tale.

Dragon Actually shares the story of Annwyl the Bloody, the bastard sister of the current, malevolent king. She is the fearless and heralded leader of the rebellion, which is growing with each passing day. However, her brother, with the help of a powerful warlock, grows close to capturing Annwyl. Just as some of his troops are about to deliver the mortal blow to Annwyl, Fearghus the Destroyer, a powerful dragon, steps in to save her.

Dragons are rarely seen these days, and many believe they are just a myth, something the solitary Fearghus thinks is just fine. However, after he feels compelled to save Annwyl, nursing her back to life and agreeing to assist in her battles against her brother, he finds he cannot stay away from her.

Overall, Dragon Actually is a solid and entertaining paranormal/fantasy romance. I like the mythology and admire the strong female hero. Annwyl is her own person and doesn’t apologize for her attitude or behaviors. She is known as “the bloody” for a very good reason, cutting down her enemies without remorse as any male leader would. Fearghus is the only male who could be her equal and that makes them a good fit. I enjoyed their companionship and the times they let their guards down to talk.

I did feel that there was a high “cheese-factor” in this story, both in the romance and in the interactions between several of the characters. I felt the story was dated in terms of tone, and my tastes in PNR have changed in the past 10 years.

One thing I did not care for was the abruptness of the ending! Without giving spoilers, the ending felt incomplete. I would have liked some sort of epilogue sharing what happens to the pair down the road. I suppose I’ll have to listen to the next title to find out if the issues are resolved, but it was not the ending I would have expected in a romance story. Additionally, I disliked that I didn’t have time to process the ending because it was IMMEDIATELY followed by the next story. No pause, no break, etc. And I had NO clue there was a second story in the book (it’s not listed in the blurb), so it was confusing and jarring.

The narration by Hollie Jackson was good at times, but overall, just okay. She tried to inject emotion into the performance, but the clipped dialogue made it difficult. Annwyl is the best of the voices, but her sudden temper voice came off like a petulant child. Fearghus’s voice is okay, but kind of neutral and not very sexy male. As the book went on, I grew to like Annwyl’s voice, but not Morfyd’s or Fearghus. They were off. I think she tried to lower her voice for the dragons, but it didn’t work for me.

Chains and Flames… this is short story featuring the courtship and mating of Rhiannon and Bercelek (Fearghus’s mom and dad). At first I did not care for the story and increased the playback speed from 1.5x to 2x. However, as the book went on, I became more submersed in this story rather than the shock over the ending of the primary story.

Overall, I am intrigued by the mythology created and the large family of dragons introduced in Dragon Actually. I plan to give the next book a chance because the overall world is interesting, and I know so many who enjoy the series. However, after finishing this title, I was left with mild dissatisfaction and disappointment.

It’s not always easy being a female warrior with a nickname like Annwyl the Bloody. Men tend to either cower in fear – a lot – or else salute. It’s true that Annwyl has a knack for decapitating legions of her ruthless brother’s soldiers without pausing for breath. But just once it would be nice to be able to really talk to a man, the way, she can talk to Fearghus the Destroyer.

Too bad that Fearghus is a dragon, of the large, scaly and deadly type. With him, Annwyl feels safe – a far cry from the feelings aroused by the hard-bodied, arrogant knight Fearghus has arranged to help train her for battle. With her days spent fighting a man who fill her with fierce, heady desire, and her nights spent in the company of a magical creature who could smite a village just by exhaling, Annwyl is sure life couldn’t get any stranger. She’s wrong…