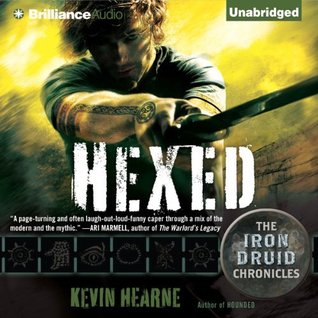 Having lived a somewhat quiet life hiding out in the East Valley/Tempe area of Arizona, Druid Atticus O’Sullivan has become quite popular after he killed two powerful Celtic gods. Different pantheons have been paying a visit to Atticus, either making sure he isn’t a personal threat or wanting him to knock off rivals. This includes his vampire lawyer, Leif, who is rather rude about wanting Atticus’s help to knock off Thor. However, when Atticus experiences an attack that should have resulted in his death, his attention turns to stopping a wicked coven of out-of-town witches looking to take over the East Valley.

Hexed, the second title in Mr. Hearne’s Iron Druid Chronicles, expands Atticus’s world beyond the personal grudges of the Celtic Fae, although he must still deal with the outfall of his battle with Angus Og. I really like how every pantheon, and even multiple versions of each deity, exists in this world. Mr. Hearne is able to build upon what was established in the first book, while creating new and interesting characters and mythology. Even with several new players and mythologies, I didn’t feel confused or overwhelmed.

Atticus is a character that could easily walk away from the trouble brewing around him, after all, he didn’t survive for two millennia by heading head-first into adversity. So I appreciate his reason for staying around and helping to protect the East Valley, out of concern for the land that was damaged in the first title. He’s not a noble protector; rather a practical hero, which is genuine and refreshing. However, I am conflicted on his “love life,” which is very much set in the Iron Age – sex is sex, and emotions are separate. As a fan of romance, part of me wants to see Atticus find a woman to be his equal partner and love interest.

The interactions with other characters and friendships Atticus develops give the series heart. His relationship with his more-than-a-dog Atticus is both sincere and entertaining. However, it’s his fondness for his widowed neighbor and his respect for her faith that truly made me smile this time around. I love how this 2,000 year old man is a “youngster” to the widow.

One thing that I did not care for in Hexed was the voice and persona presented for the Native American Coyote god. After loving the character of Coyote in both the Mercy Thompson and Stormwater series, I found him to be unlikeable as presented in Atticus’s world. First, Luke Daniels’s voice for Coyote was very annoying. The twangy, slow, cowboy accent did not suit a native god in my head. And when Atticus started using the same accent, it made me bonkers, and it was hard to tell who was talking. Second, Coyote’s attitude is no fun. He was really not a trickster god, but rather, a pain in the ass. I honestly hope he doesn’t make a reappearance in the series, and I was thankful his part was limited.

Other than the performance of Coyote, I continued to enjoy Mr. Daniels’s narration for the book. I enjoyed his voice for Atticus, finding it calming as I would expect from a millennias-old Druid. Mr. Daniels offers a solid range of voices for both female and male, human and non-human characters.

Overall, I enjoyed my second outing with Atticus and his friends. A handful of seeds have been planted, giving plenty of fodder for future titles. The Iron Druid Chronicles is off to a solid and entertaining start, one I hope will get stronger in the books to come.

12 responses to “Listen Up! #Audiobook Review: Hexed by Kevin Hearne”