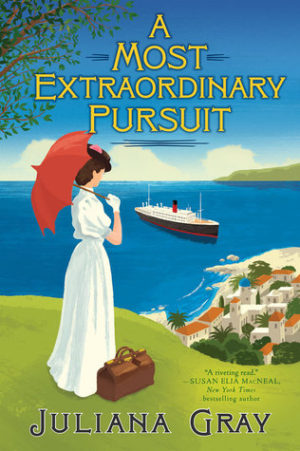 If you are familiar with my reviews, you know that I enjoy Juliana Gray’s work and typically rate it fairly high. I am disappointed to say that wasn’t so much the case with A Most Extraordinary Pursuit. When I received the title I was excited to continue the adventures with the Duke of Olympia’s tribe, and although Olympia clearly has a hand in this story, I found it to be nothing like Ms. Gray’s other novels. I realize that doesn’t have to be a bad thing, but I really struggled with her changed format and writing style. Although the characters had plenty of chemistry and banter, I found the storyline to be jumpy. The constant bouncing back and forth between the narrator’s current world and the “book of Hayward” was distracting, hard for me to follow, and sometimes downright exhausting. I finally had to start taking notes so I didn’t have to keep going back and forth between chapters to remember what was going on. I understand what Ms. Gray was attempting to do, but think it would have worked better if she had added these parts at the beginning or end of the chapters, rather than sprinkling it whenever and wherever.

Another area that was a struggle for me was in the way some of the secondary characters were presented, for example the Queen. I have read the entire book and still have no idea what her purpose is or why she is a part of the storyline. Is she supposed to represent the mother Truelove never really knew? Is she just a figment of her imagination? I understand better why her dead father appears throughout the book better than why the Queen jumps in and out. Maybe that will be better explained in future books, but in A Most Extraordinary Pursuit I found it to be distracting and frustrating. While the dialogue between Truelove and the Queen is well written and the banter between them is even humorous at times, I’m just not sure why it’s in the story. It adds to the word count but I’m not sure it adds to the storyline.

In conclusion, I guess what I’m saying is if you are looking for anything even remotely close to Ms. Gray’s previous work, A Most Extraordinary Pursuit will likely leave you wanting. But if you are looking for a completely different style of writing full of the supernatural and a mysterious storyline then you will likely enjoy this. As for me, I’m still undecided until I read the next book in the series.

As the personal secretary of the recently departed Duke of Olympia—and a woman of good character—Miss Emmeline Rose Truelove never expected to be steaming through the Mediterranean on a luxuriously appointed yacht under the watchful and jovial eye of one Lord Silverton. But here they are, as improper as it is, on a quest to find the duke’s heir, whereabouts unknown.

An expert on anachronisms, the adventurous Maximilian Haywood was last seen at an archaeological dig on the island of Crete. And when Truelove and Silverton disembark, they are met with incidents of a violent nature: a ransacked flat, a murdered government employee, an assassination attempt. And as they steam from port to port on Max’s trail, dodging danger at every turn, Truelove will discover the folly of her misconceptions—about the whims of the heart, the desires of men, and the nature of time itself…

Reviews in the Series:
The Duke of Olympia Meets His Match by Juliana Gray (Book #0.5)