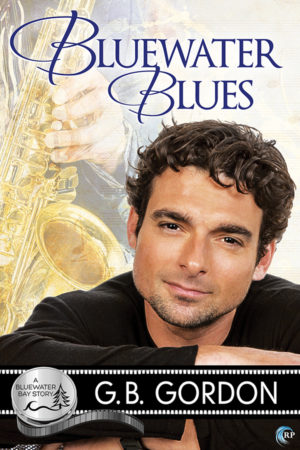 Jack Daley is a man with secrets. After living on the run for years with his sister, Margaret, they’ve finally found a place to call their own in Bluewater Bay. But, hiding out is lonely business, and Jack just can’t help feeling drawn to the tall, gorgeous stranger who seems more familiar than he should. Though her autism is both a complication and a gift, Jack must learn to accept that Margaret is plenty capable when it comes to her own life, and that, with a little trust and faith, they both find happiness in the refuge that has become a real home.

Having learned to cope remarkably well with his autism over the years, Mark Keao keeps the details of his life, and his diagnoses, to himself. He’s fantastic at his job, is involved in activities that make him happy, and isn’t remotely interested in anyone’s pity. Still, pride is a complicated thing, especially on the set of a demanding TV show like Wolf’s Landing. It doesn’t help that the one man who might finally be able to understand and care about him, is keeping things from him. But, Mark’s no quitter, and he’s not about to let Jack go without a fight.

Without question, autism plays a tremendous role in Bluewater Blues, easily rivaling, if not surpassing, the romance that develops between the two main characters. Margaret and Mark represent very different manifestations of the spectrum, yet both are independent and manage their lives well. I believe the author approached the subject thoughtfully, and it seemed that a great deal of consideration was given with regard to research and dignity during the writing process.

It was also nice to see Mark and Jack engage in, and eventually maintain, a successful and intimate relationship with such a sense of normalcy, as it should be. Whatever difficulties they did have were the result of Jack and Margaret’s past—and Jack’s habitual protectiveness—rather than Mark’s autism and SPD. Many of the things that could have been used as a means of dividing them actually serve to make them complimentary instead. In fact, Jack’s obligation to exercise that much discipline and responsibility for so long makes his handing control over to Mark seem like an enjoyably viable, yet mutually beneficial, solution.

Although it’s not always an effective tactic, the author’s use of dual POV’s works fairly well in Bluewater Blues. Mark’s chapters are written in the first-person, allowing the reader to experience his everyday life more directly. Jackson’s scenes are all in third-person, leaving us to view Margaret’s autism primarily through his eyes—although we also see a few of these from Mark’s perspective.

In the end, I thought Bluewater Blues was a good addition to this series. G.B. Gordon has created three likable, highly interesting main characters, while taking into account that autism is as complex and unique as the individual living with it. I did have a little trouble believing certain points with regard to Jack and Margaret’s past, but they weren’t enough to overshadow the rest of the story for me. Mark and Jack make for a great pairing, their temperaments and needs proving them to be extremely well-suited for one another. Overall, the Bluewater Bay series is still among my favorites, and I’m eager, as always, to see it continue as long as possible.

Jack Daley left his music career behind—along with his domineering father—and is struggling to make a new life for himself and his autistic sister in Bluewater Bay. When a summer storm sweeps a handsome stranger into his general store, Jack is more than ready for a fling. No strings attached, because Jack can’t share the secrets he and his sister are hiding from. Unfortunately, his feelings refuse to stay casual.

Mark Keao is married to his job as a costume designer on Wolf’s Landing. He’s autistic, so he’s used to people not knowing how to interact with him, but that doesn’t mean he wants to be a hermit. Especially when he meets Jack Daley, who dances with brooms, shares his love of the blues, and gets him like no one else. But relationships have proven complicated in the past.

Just when Mark is ready to try anyway, Jack pulls back. But Mark isn’t giving up, and neither is Jack’s sister. And then there’s the music both men love, bringing them together time and again. It will take trust, though, to bring them together for good.

G.B. Gordon worked as a packer, landscaper, waiter, and coach before going back to school to major in linguistics and, at 35, switch to less backbreaking monetary pursuits like translating, editing, and writing.

Having lived in various parts of the world, Gordon is now happily ensconced in suburban Ontario with the best of all husbands. Santuario is G.B. Gordon’s first published work, but many more stories are just waiting to hit the keyboard.

To celebrate the release of Bluewater Blues, one lucky winner will receive $20 in Riptide Publishing credit! Leave a comment with your contact info to enter the contest. Entries close at midnight, Eastern time, on October 22, 2016. Contest is NOT restricted to U.S. entries. Thanks for following the tour, and don’t forget to leave your contact info!