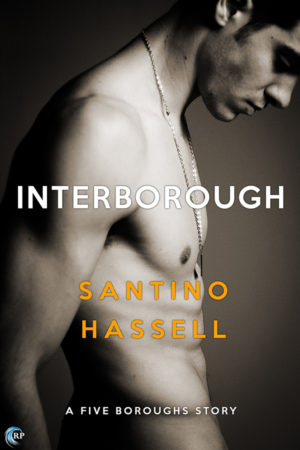 I wasn’t sure what to expect when I read that Interborough would be a follow-up to Raymond and David’s first story in the series, Sunset Park. While the latter ended well, this new narrative is even more complicated and beautiful, sometimes ruthlessly illustrating the fact that finding happiness and keeping it are two very different things.

As was the case in Sunset Park, I found Raymond impossible not to love. Instead of the traditional trope of the wayward son failing to live up to the expectations of others, Ray never had anyone in his life to believe in what he could be in the first place—until David. Now that he and David have been together for a year and a half, however, he’s working two full-time jobs as well as attending college classes. He’s definitely got his mind on the future, but he’s worn himself down to the bone, leaving little to no time to focus on his relationship with David. Regardless, Raymond is a truly wonderful character, and I couldn’t help becoming thoroughly invested in him all over again.

While I still had a harder time settling into David’s corner, I thought the feelings that fueled his actions were clearer in Interborough, especially later in the story. David’s desperate need to avoid feeling insubstantial in his own life does not manifest itself well at all, and when an abundance of alcohol was involved, I actually had to set the book aside and pace for a little while. As much as I wished I could have intervened on occasion, David’s own desire to stop himself, along with his inability to do so, made me feel completely awful for them both.

I don’t often dwell on the sex scenes in a story, but in the case of Interborough, they were about far more than just the act itself. Even the most intimate moments between Raymond and David have layers of meaning—love, desperation, remembrance, and regret—and the shadow of loss is almost always present, creeping in at the edges. Oftentimes, it seemed that the literal, physical connection was only thing keeping them from flying apart altogether.

While the relationship between Ray and David is the main focus of the narrative, Interborough unflinchingly examines several contributing factors that are undeniably relevant in our world every day. The fact that Ray is Puerto Rican and David is a “preppy white boy” is an issue. Racial profiling is something Ray has lived with all his life, and David’s furious indignation when confronted with it firsthand stands out even more strongly in contrast to Ray’s bitter resignation. Additionally, Mr. Hassell also includes some highly thought-provoking moments concerning entitlement and what being an ally really means.

Despite the heavier themes woven throughout Interborough, there were also plenty of lighter, happier moments, too. Michael and Nunzio occupy a significant portion of the story, which I was especially happy to see. Although we’ve met them before, via either introduction or anecdote, Ray’s “Queens crew” are very present in this story, proving that they are as much Ray’s family as Michael and Nunzio. Caleb, Oli, and Aiden are also included, as are many other characters who we will hopefully meet again later in the series.

Also, the epilogue was so good I might have gotten a little weepy.

The Five Boroughs series is, without question, one of the finest I’ve ever read. Never saccharine or trite, Interborough is often all sandpaper and rough surfaces, but what is left after the fighting is done is something so pure and right that it almost hurts a little—in the best ways possible. Even though it is a sequel by definition, everything about Interborough felt new and vital, leaving no doubt that Mr. Hassell is an enormously gifted storyteller. Substantive and beautiful, this is a story that lingers under the skin, its voices still ringing well after the cover was closed. I really didn’t want it to be over. And I can’t wait read it again.

The Raymond Rodriguez from a few years ago wouldn’t recognize the guy he is today. He’s left his slacker ways far behind him and is now juggling two jobs and school. But the balancing act doesn’t allow much time for the man he loves.

David is doing his best to be supportive, but problems at work and his own insecurity leave him frustrated—in more ways than the obvious—whenever he goes to bed before Raymond gets home. The heat and affection between them is still there, but they barely have the time or energy to enjoy it. And it doesn’t help that Raymond is still hiding David from his colleagues.

The stress mounts so high that a vacation in paradise is filled with turmoil instead of harmony, and culminates on their return to the five boroughs with broken promises and heartache. They have to figure out how to stop allowing their differences to overshadow their love. It’s the only way they’ll make it to forever.

Santino was raised by a conservative family, but he was anything but traditional. He grew up to be a smart-mouthed grunge kid, then a transient twentysomething, and eventually transformed into a guy who spends his days and nights writing romance with an edge.

Santino is a dedicated gamer, a former fanfic writer, an ASoIaF mega nerd, a Grindr enthusiast, but most of all he is a writer of LGBT fiction that is heavily influenced by the gritty, urban landscape of New York City, his belief that human relationships are complex and flawed, and his own life experiences.

To celebrate the release of Interborough, one lucky winner will receive $25 in Riptide Publishing credit! Leave a comment with your contact info to enter the contest. Entries close at midnight, Eastern time, on October 29, 2016. Contest is NOT restricted to U.S. entries. Thanks for following the tour, and don’t forget to leave your contact info!

One response to “Review + Blog Tour: Interborough by Santino Hassell”