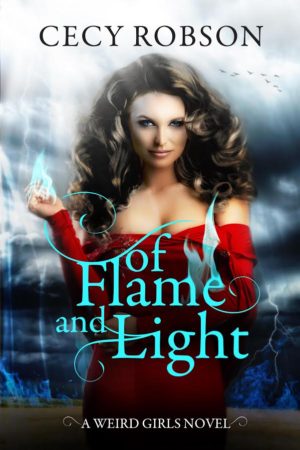 Of Flame and Light
Author: Cecy Robson
Reviewers: Gikany and Una
Rating: B

Gikany and Una have been anticipating this novel since we met Taran in the first Weird Girls novel, A Curse Awakened. We loved this mouthy, confident woman. We found it fascinating to see the world of the Wird sisters through Taran’s eyes.

Taran’s persona is just a façade. Taran’s history (which we hope to learn more about in future books) has taught her to show a tough-as-nails façade to hide her brittle self-esteem. She is terrified of being in love. This fact is illustrated through her frustrating relationship with Gem. One would think that since they are mated, she would have nothing to fear, but Taran is afraid that if she loves Gem, mate or not, he will leave her. Taran is hopelessly in love with Gem but to protect herself she has rejected him because of the injury she suffered in A Cursed Bloodline. A great recap of Taran’s story can be read in the prequel novella, Of Flame and Promise (review link below).

Taran’s injury was grave: she lost her arm. The werewolves were able to use pack magic to give her a new arm, however, Taran’s new arm did not grow back exactly as it was. This new arm is wreaking havoc with her “Wird girl’s cursed” magic. It is almost as if the arm has a mind of its own. To make matters worse, it even looks different. Due to this, Taran feels disfigured and no longer attractive. It doesn’t help that Gem seems to avoid touching or even acknowledging this arm. Now to make things catastrophic (a norm for the Wird sisters), the arm seems to be causing Taran’s magic to backfire when she is emotional. With the current stress of her non-relationship with Gem, she is an emotional mess and her magic is going crazy. Taran is forced to turn to the witches (who she loathes) to learn to control her magic.

The witch coven is a cross between a stereotypical sorority house and a horror novel orphanage. The animosity between Taran and the head witch, Genevieve, is seething since Genevieve is lusting after Gem. With Gem spending a lot of time there, and the rumor mill running full force, Taran suspects she has been replaced. Although she tries to make things work at the coven, the Wird sister luck strikes every time making things worse for Taran.

Although the issues between Gem and Taran are not resolved, there is much progress made between Taran and her arm. The witty humor and banter that are the heart of the series are, as always, present in the novel along with some gritty emotions and situations. The constant berating of Taran’s self-doubt does get tedious, but it is offset by the crazy situations she finds herself in. With the vampires showing interest in Taran, we cannot wait to see what awaits her next. We are eager to see what is going on with Emme and Bren and hope that Gem and Taran can work it out. We look forward to the next novel in the Weird Girls series.

Taran Wird holds the unique ability to conjure fire and lightning. She is mated to Gemini, Second in Command to the Squaw Valley Pack of the Lake Tahoe Region, and the sole werewolf to possess the ability to split into two wolves. And although they are mates, Taran’s insecurities have driven them apart.

Devastated by an injury that left her with a zombie-like limb, Taran struggles to regain command over her magic. But when her arm and her power turn against her, lashing out on those she most loves, she knows she can no longer carry this burden alone. Not that she likes the alternative.

The only way to regain control of her magic is to align and learn from the local coven of witches―the very ones who sought to banish her when she and her three unique sisters first moved to the mystical region. But although Taran is trying, the teachings don’t come easy, and the tasks leave her weak and emotionally shattered.

Yet Taran must learn and learn fast. Time is running out. The fire she once mastered so easily has become her greatest adversary and is now slowly burning her alive . . .

Cecy Robson is an award-winning author of magical realms, to-die-for Alpha heroes, and young adult adventure. A double RITA® 2016 finalist for Once Pure and Once Kissed, and published author of more than fifteen titles, you can typically find her on her laptop or stumbling blindly in search of caffeine.