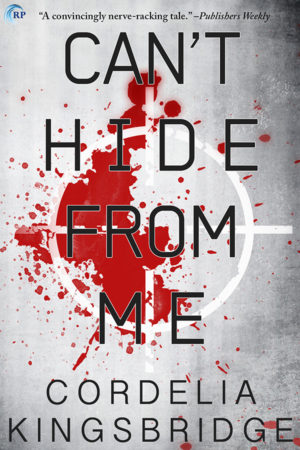 As a member of a highly-skilled ATF team, Charles Hunter is a clever, adept agent who takes his profession seriously. Having recently broken off an engagement, the last thing he needs is to reconnect with another ex-lover during an emergency extraction from the latter’s current undercover assignment. Still hurting and bitter, Charles isn’t prepared for all the ways his life spins out of control when a stalker complicates the situation, and all the secrets he’s tried to hide come crashing down on him.

Ángel Medina has been living a lie for two years. When he was given the chance to go undercover and bring down one of the most notorious cartels on the ATF’s hit list, he had to take it. Letting go of the man he loved to do it wasn’t easy, but he wasn’t willing to live his life as someone’s “dirty little secret,” either. But, when his only contact to the real world goes missing, and an extraction is his only hope of survival, his past and present collide in ways he could never have expected.

On initial examination, Can’t Hide from Me, by Cordelia Kingsbridge, had a lot going for it: a diverse cast of characters, strong personalities, a range of sexual identities, suspense, as well as a path to redemption and second chances. Yet, as I got further into the narrative, I found that there were a few issues that I was never able to accept or ignore enough to become truly engaged with the story.

One of my biggest issues is that I thought there was too much sex for the story trying to support it. It’s not the actual quantity of sex scenes that bothered me exactly, it’s just that, due to the characters’ circumstances, and the suspenseful intent of the narrative, a majority of these encounters seem more gratuitous than purposeful. Given the nature of Ángel’s most recent undercover operation, as well as the addition of a stalker who’s clearly much closer than should have been possible with an elite ATF team, a lot of the sex in Can’t Hide from Me seems emotionally and mentally reckless, at best. I try to ignore the “heat ratings” of a story, however, so others may not have any qualms about the situation.

While I usually love suspense and mystery in the stories I get to review, it just didn’t quite work as well in some places here, particularly near the end. Earlier on, I really enjoyed the whodunit aspect of Can’t Hide from Me, though I was able to guess who the stalker was in the first half of the novel. It wasn’t until the last third of the book, during what should have been the most tension-filled portion of the story, that the implausibility of certain situations made me lose my connection to the narrative. The stalker also became creepier and more exaggerated rather than capable and sinister. I also had a hard time reading all the detailed descriptions of BDSM gear used as restraints during the kidnapping of an already emotionally-worn man.

Can’t Hide from Me is an ambitious, adrenaline-fueled tale of obsession and survival that I believe has the potential to become part of a larger universe, even though it is billed as a standalone. While both main characters have had their share of trouble, in the end, I couldn’t deny a special fondness for Ángel. With gunfights, high-speed chases, and a stalker on the loose, there’s no questioning the suspenseful nature of the story. Though not consistent, there were several “edge of your seat” moments that kept the action moving at a brisk pace. Overall, I wasn’t able to get as wrapped up in this story as I’d hoped, but I’d still be very interested to see what Ms. Kingsbridge might come up with next.

Charles Hunter’s team is on a mission to extract an unidentified ATF agent from an undercover job gone wrong. All they’ve got to go on is the rendezvous location—until Charles recognizes the ex he hasn’t seen in years. Their “simple rescue mission” is about to get a lot more complicated.

For Ángel Medina, adjusting to life after his cartel nightmare is hard enough without confronting memories of a failed relationship. All he wants is a fresh start. But when a violent stalker lashes out from the shadows, Ángel realizes his nightmare is far from over.

As the stalker’s obsession escalates and bodies start dropping, Charles and Ángel are thrown together in a desperate search for the culprit. Tempers flare and old passions reignite, drawing them back into the same turbulent relationship that once ended in disaster.

But the stalker isn’t letting go—and the next strike might hit straight through the heart.

2 responses to “Review: Can’t Hide From Me by Cordelia Kingsbridge”