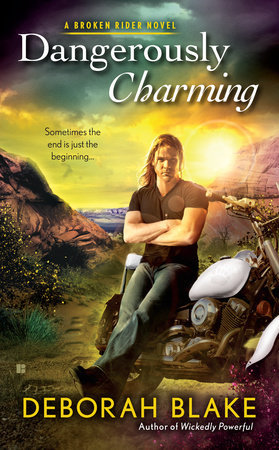 I must admit, I was pretty excited when I learned Deborah Blake had a new series starting. Fans of her Baba Yaga series will see familiar characters in the Broken Riders novels. However, if you’re new to this world, like me, Ms. Blake does a fabulous job of bringing her new readers up-to-speed.

I really like the world-building. As I was reading, I didn’t find anything left out—everything was explained well, and wasn’t overdone. Sometimes, when I read a paranormal story, the author explains and re-explains. Um. I got it the first time; thanks for the second reminder **eyeroll** I got it the first two times it was mentioned. Not so with Ms. Blake. She gives her readers credit for being intelligent enough to remember facts, as well as figure out things on their own.

I liked Jenna. She was relatable, and I connected with her immediately. She seemed grounded, and while she was dealing with her own brand of WTH, she managed to allow herself, reluctantly, to help Day deal with his demons.

I seriously fell for Mikhail Day, though. All the things he went through in the Baba Yaga stories? Yeah. We get to see the aftermath in Dangerously Charming. With a penchant for damsels in distress, Mick finds himself in a situation he vowed to never become involved in again. Reading some of Day’s POV was like a punch in the gut—but after the hit, there was revelation and resolution. I found myself putting down this title several times because I had to process the goings on. Especially from Day’s POV.

I had a couple unanswered questions at the end I hope will be resolved in the upcoming titles or in a ‘where are they now’ novella. Seriously. I need to know who the biological father of Jenna’s baby is! Maybe the point of the title is that biology doesn’t make a father—but I still wonder.

The Riders are three immortal brothers who protect the mythical Baba Yagas. But their time serving the witches has ended—and their new destinies are just beginning…

Ever since a near-fatal mistake stripped Mikhail Day and his brothers of their calling to be Riders, Day has hidden from his shame and his new, mortal life in a remote cabin in the Adirondack mountains. But when a desperate young woman appears on his doorstep, he cannot resist helping her—and cannot deny how strongly he’s drawn to her…

For generations, women in Jenna Quinlan’s family have been cursed to give up their first born child to the vengeful fairy Zilya. When Jenna finds herself unexpectedly pregnant, she is determined to break her family’s curse and keep her baby, even if it means teaming up with a mysterious and charismatic man with demons of his own…

To unravel the curse, Jenna and Day will have to travel deep into the Otherworld. But the biggest challenge of the journey might not be solving an ancient puzzle but learning to heal their own broken hearts…