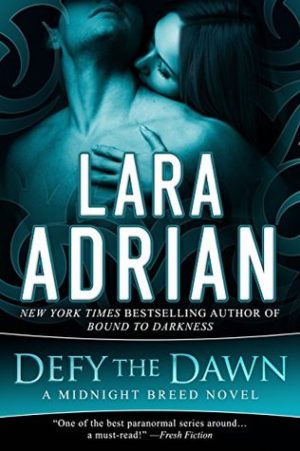 Picking up immediately after the conclusion of Bound to Darkness, Defy the Dawn shares the story of Brynne, a day-walking, Breed female who was created by a madman, and Zael, an Atlantean defector who has formed a loose alliance with the Order. After losing her job for secretly helping the Order (last book), Brynne agrees to work with the Order as they go after Opus Nostrum, the terrorist group out to cause mayhem and chaos all over the globe. Meanwhile, Zael can no longer contain his desire for and admiration of Brynne, but his womanize past may keep Brynne at a distance.

Defy the Dawn is the first book that features a romance between two characters with relatively no ties to the original Breeds or the offspring of the Order. I state this upfront because I believe this is part of the reason why I had a difficult time connecting to the romance and story in general. While I found the book exciting and action-packed, I struggled to stay focused on the storyline and had little investment in the outcome. And frankly, there was little progression in the overall plot involving Opus Nostrum or the fight with the Atlantean Queen.

Brynne and Zael shared a passionate romance, filled with that desperate need to be with one another all the time. Yet, Brynne has a secret which keeps her at a distance from everyone. Even once Zael finds out the her hidden horror (and accepts her regardless), Brynne continues to use it as a reason to stay apart. Their romance was most enjoyable during the scenes when the pair were together, sharing and enjoying their feelings, but I got frustrated when they would pull apart and say things were a mistake.

I also struggled with the ending of the story, which felt too easy. You know those times when you threaten to punish your child, but then you don’t follow through? It felt like that. Additionally, two new characters were briefly introduced in the last few chapters of the book, and I just have a gut feeling that it was a set up for the next romance. I could be wrong, but it added to the disconnect – thinking that the next book may be about two characters about whom I know nothing.

Overall, Defy the Dawn is a solid story and sexy romance. There is lots of action and passion. It’s just… I have fallen out of interest with this series (and PNR in general). I can’t connect with the overall story any longer, and I am struggling to connect to these new characters when my old favorites are still around.

My Rating:  B-  Liked It, but had a few small issues

Daywalker Brynne Kirkland survived a hellish upbringing as a product of a madman’s lab. Tough, driven, and devoted to her work in law enforcement, Brynne has never dared to risk opening her heart to anyone–least of all a handsome immortal from a world on the verge of war against hers.

Atlantean warrior Zael left the intrigue of his realm several lifetimes ago, along with the battles he fought as one of the queen’s legion. As a free-spirited loner walking the fringe of two worlds–that of his secretive and powerful people, and the outside world belonging to mankind and the Breed–it was never his intention to return to combat and bloodshed. Nor had he imagined that he might ever be tempted into anything stronger than desire . . . until he meets Brynne.

Thrust together as allies of the Order in the fight against a diabolical enemy, Zael and Brynne embark on a mission that will ultimately force them to decide between duty to their people, and a passion that defies all bounds.