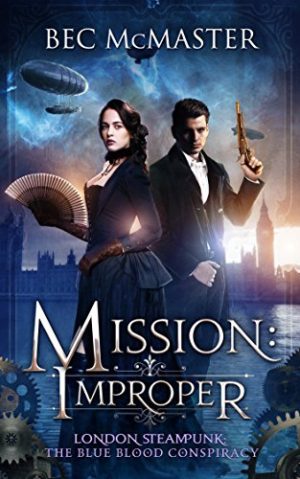 In the three years since the rebellion, the queen has instituted reforms that give more power to the humans, Mechs, and non-blue bloods, while diminishing the control of the Echelon. This isn’t sitting well with some, and there have been a series of unsolvable crimes aiming to lessen the queen’s effectiveness as ruler. The Duke of Malloryn has taken it upon himself to solve the mystery and put an end to the terror. He’s assembled a team of elite to find out what group has been causing riots and problems. Caleb Brynes, a highly respected blue blood Nighthawk, and Ingrid Miller, a verwulfen spy have both accepted the challenge of being part of Malloryn’s team.

Mission: Improper is the first book in the new London Steampunk spin-off, taking place three years into the future after the final book in the original series. I love that the author has found a way to continue this exciting series – keeping the same formula of action-packed mystery coupled with sexually-charged romance. The mix of paranormal, alternate history, historic setting, and steampunk mech is unique and engrossing. Mission: Improper expands the established mythology, but not so greatly as to become eye-rolling. The author has added enough new, mixed with a lot of the old, to create a whole new set of concerns for our heroes.

Caleb and Ingrid make for a perfect pair. I admire that the author didn’t toss unnecessary drama in their way, but let the story and characters dictate the speed and direction of the romance. They don’t have an easy path, and I like that both are uncertain about giving of themselves fully (emotionally, not physically). Each has a jaded history that puts wariness into their decision making, yet they also want to make sure not to hurt the other. It’s honest and raw emotion like this, that won me over:

“I am going to pursue you, Ingrid Miller, with the intention of never letting you go. So fair warning…”

“It’s no longer about winning your body, Ingrid. When I finish these challenges, I intend to win your heart.”

Ms. McMaster creates some of the best romances out there: always steamy and sexy while simultaneously emotionally gripping. However, it’s not just the love story that keeps me coming back again and again. Every story centers on some sort of mystery and huge investigation. I become completely captivated as the characters try to figure out the puzzle. This time is no different. Mission: Improper follows Malloryn’s group as they uncover a huge conspiracy, and I believe they have only skimmed the surface in this first book.

Mission: Improper is an excellent, fascinating start to Ms. McMaster’s new London Steampunk: The Blue Blood Conspiracy series. I was completely captivated by the mysterious new baddies and their abilities. I like that there was subterfuge within subterfuge and layer upon layer, and we’ve only just begun to peel back that first layer. I cannot wait to discover more.

Three years ago, London society changed forever, with a revolution placing the widowed Queen firmly on the throne her blue blood husband tried to take from her. Humans, verwulfen and mechs are no longer considered the lesser classes, but not everybody is happy with the new order…

Entire families have gone missing in the East End. When Caleb Byrnes receives an invitation to join the Company of Rogues as an undercover agent pledged to protect the crown, he jumps at the chance to find out who, or what, is behind the disappearances. Hunting criminals is what the darkly driven blue blood does best, and though he prefers to work alone, the opportunity is too good to resist.

The problem? He’s partnered with Ingrid Miller, the fiery and passionate verwulfen woman who won a private bet against him a year ago. Byrnes has a score to settle, but one stolen kiss and suddenly the killer is not the only thing Byrnes is interested in hunting.

Soon they’re chasing whispered rumours of a secret project gone wrong, and a monster that just might be more dangerous than either of them combined. The only way to find out more is to go undercover among the blue blood elite… But when their hunt uncovers a mysterious conspiracy, Byrnes and Ingrid must set aside their age-old rivalry if they have any chance at surviving a treacherous plot.