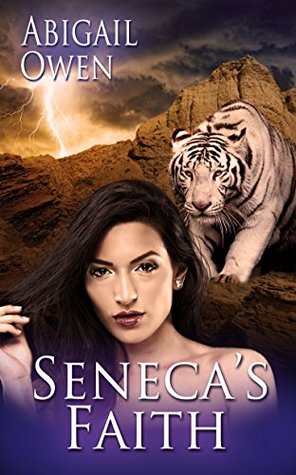 Seneca’s Faith is the fourth novel in the Shadowcat Nation series.  This interesting take on shifters seemingly comes to a close with this book.  Although there may be more books to come in the series, Gikany and Una liked the conclusion we found with Seneca and Gage’s journey.

Seneca has appeared in previous books in the Shadowcat Nation series, but we didn’t learn much about her.  As the novel begins, we find out there is much more to Seneca than anyone knew.  Since the evil Rick Delaney is her father, Seneca has been forced to hide who she is and to pretend to be a submissive latent.  Her mother, before she was killed, impressed upon her the necessity of hiding her true self.  When Seneca is thrown together with Gage, she is used to keeping her secrets, relying on herself, and pretending.  But Gage isn’t fooled.  Although it is understandable due to her history, the constant deception with Gage started to grate after a while.  We began to wonder how much more Gage had to prove himself before Seneca would realize the earnestness of his sincerity and commitment to her.

At the beginning of Seneca’s Faith, Gage is engaged to Seneca’s sister and is fighting his attraction to Seneca.  From the beginning Gage is honest and forthcoming with Seneca.  Although he does try to protect her, he doesn’t lie to her.  It felt like it took Seneca forever to realize the gift that Gage is to her.  Seneca’s deceptions made Gage’s protectiveness of Seneca understandable.  This book almost had the feel of A Comedy of Errors.  The innate goodness of Gage and Seneca gave us hope that they would finally break down the barriers and come together in heart and soul.

The overarching plot regarding Rick Delaney and the animosity of the mountain lions reaches its conclusion in Seneca’s Faith.  The twisting and turning of the plot was fascinating.  The plight of the Shadowcat nation has been resolved.  The clans have stabilized, the new leaders all seem to be on the same page.

Seneca’s Faith was a nice capstone to the strife that began in Andromeda’s Fall, the first novel in the Shadowcat Nation series.  Gikany and Una liked the series and wonder what other stories might be told in this world.

The Delaney Dare needs a new leader—one from outside, after their own Alpha’s actions led to the shifter war. Gage McAvoy has agreed to marry one of the previous Alpha’s daughters and try to keep the dare from falling apart. Unfortunately, the daughter he’s agreed to marry is not the one he wants.

Seneca Delaney is a known latent, unable to shift. She’s remained in her dare, enduring rejection and isolation all her life, even from her own father, because she had no other place to go. Standing on the sidelines yet again while Gage marries her older sister is the last thing she wants to do. Then circumstance throws her together with the one man she can’t have, trying to save a nation of shifters who don’t want her, and risking the exposure of lifelong secrets that could result not only in her death, but in Gage’s.