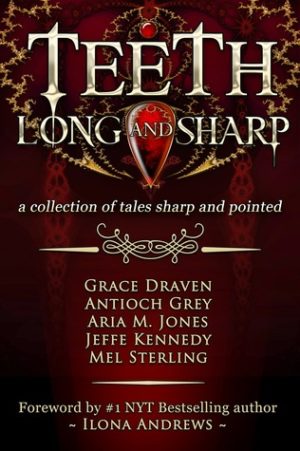 Teeth Long and Sharp is a chillingly lovely collection of short stories.  Each one stands alone and not everyone has a happy ending – well, depending on which character you align with.  Fascinating, suspenseful, ironically witty, this collection is perfectly timed for a Halloween reading.

Ivories was a very short snippet of a contemporary story.  It reminded me of an impressionist painting, you are able to interrupt or derive what you will from it.  As I saw it, the girl and the piano had a connection that was driven apart by the teacher.  The piano had no patience for it.  However, I also wonder (as it is by the same author of The Vampires of Mulberry Street) if maybe there was a connection between the two stories; this one being a bit of an introduction.  Although it was my least favorite (mainly due to the short length) I still enjoyed it. B+

Night Tide is an eerie yarn with a more historical background.  Though still a novella, it had the feel of a fully fleshed novel.  I loved Ziga and her kind-hearted but strong-willed nature.  Her ability to commune with the water was fascinating.  I enjoyed the old fashioned ghost story feel of the narration.  Ms. Draven slowly sucked me and I find myself completely immersed in the world she created. Though the story resolves nicely, I have my fingers crossed that hopefully Ziga and this world has more stories to be told. A

The Noise of Fur was a very different story, a somewhat dark and suspenseful coming of age tale.  It took me a few minutes to understand Raven’s tribe.  Once I started to understand who Raven and her people are, the story took on a new meaning.  I really enjoyed this mysterious suspense story.  The ending was fascinatingly bittersweet and hopeful.  The juxtaposition of the old adage of curiosity was ironic.  I really enjoyed it!  A

Venetrix was an odd and darkly suspenseful mystery.  We follow Alair and Martis as they are embarking on a mission of revenge.  They know who killed their family member, but in this strange city the law of the land claims there is no proof.  As they discover the whys and hows, we are given a glimpse of this strange island port town filled with paranormal creatures.  It was dark and mysterious but enchanting all the same.  It had a nicely goosebumps feel.  A

The Vampires of Mulberry Street was a delightfully intriguing story of an elderly woman who figures out vampires have moved into her neighborhood (much to her chagrin).  She goes about evicting them, though it doesn’t quite go as she planned.  I enjoyed this novel for at first we know nothing about Mrs. H other than that she is a happily retired lady.  As the novel unfolds we learn about her and the nature of vampires.   It was gripping and I enjoyed it.  A

Voice of the Knife is the last story in the collection and my favorite.  It is the longest offering in the collection, but so gripping it was a quick read.  Charles Napier is a retired soldier who is now a biologist.  He ventures into the swamps to figure out if a long extinct bird may actually have returned. Unfortunately for Charles, the swamp he is exploring is haunted, and the haunt is lonely.  This story was chillingly suspenseful and had me on the edge of my seat the entire time.  A+

A collection of tales sharp and pointed.

IVORIES by Aria M. Jones – Eleanor resents the afternoons sacrificed to piano lessons and a disagreeable teacher who gloats over her failures and humiliations. Today, it’s Mrs. Lundemann’s turn for a sacrifice of a very different nature…

NIGHT TIDE by Grace Draven – Something hunts the surf at night, luring villagers to their deaths with a lullaby of sorrow and the torture of nightmares. Blessed with the gift of water-sight, Zigana Imre senses the presence of an ancient predator possessing a taste for human flesh sweetened by grief. With the help of a child of earth, she will battle a spawn of the sea to protect a loved one and save a man who will one day save a world.

THE NOISE OF FUR by Jeffe Kennedy – The first time, it came at night…

In the forest, a Thing prowls, picking off members of young Raven’s tribe. If they flee their home, they face starvation. If only Raven can answer the question of what kind of fur makes that noise.

VENETRIX by Antioch Grey – A merchant and a poet come to the City, seeking justice for the murder of a relative, and if justice cannot be found, they will have revenge. They collude with vampires, negotiate with mermaids, share ale and meat pies with gargoyles and navigate the prisons, waterways and court system of a city ruled by a Master possessing long life and even longer teeth.

The City will make you a fortune, or it will kill you, but it will always change you.

THE VAMPIRES OF MULBERRY STREET by Aria M. Jones – Living the simple life in small town Indiana, Mrs. H has everything she could possibly ever want: a cozy house, peace and quiet, and a garden that is the envy of Mulberry Street. But when sinister outsiders disrupt the tranquility of her neighborhood, it might be time for her to come out of retirement and take up tools more deadly than pruning shears and a trowel.

VOICE OF THE KNIFE by Mel Sterling – Biologist Charles Napier doesn’t mind getting lost in a Florida swamp—it’s part of a scientist’s job. Logic and training will get him out safely. Except lurking in this swamp, there’s a monster Napier’s science can’t explain…a lonely, exquisite, desperate monster.