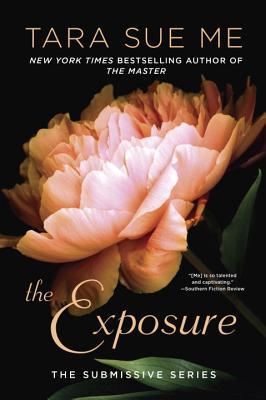 The Exposure
Author: Tara Sue Me
Reviewer: VampBard
Rating: A-

I was super excited to read The Exposure because Meagan is a switch—she will either Top or bottom depending. And, because I wanted to read Meagan’s story. Pairing her with Luke was inspired. The glimpses we’ve had of Luke in other stories had made me curious about him, and I simply needed to know more.

Now, The Exposure has a bit of a romantic suspense feel—there’s blackmail happening, and it plays out in the relationship between Meagan and Luke. But, with their history, the ‘distance’ could’ve honestly been leftover from their previous entanglement. It’s also really cool to see people in the lifestyle that aren’t utter noobs. Both Meagan and Luke are ‘veterans’ and established. Many of the D/s stories have an established Dom and bring in this romantic interest who is new to the lifestyle.

Meagan had a lot going on in The Exposure. Besides having to deal with her feelings about getting back into modeling and working with Luke again, she’s got the work thing and the blackmail thing. Take into account her need to both Top and bottom as a switch, and it’s pretty much a rollercoaster from Meagan’s perspective. I kinda liked that part. Usually, when there’s a Dominant character, they’re pretty much in control of everything except their love interest, which throws them off-kilter. Meagan definitely wasn’t.

I always enjoy reading The Submissve series by Tara Sue Me. Part of it is the glimpses into Abby and Nathaniel’s married life while maintaining a D/s relationship. We see glimpses of past couples as well, and it’s great to have that check-in with the characters of previous titles in the series. The continuity—if nothing else—keeps me reading and coming back to this series. I’m intrigued by Ms. Sue Me’s new series—Lessons from the Rack—debuting April 2017. The first title is Master Professor. While I look forward to more titles in the Submissive series (are there more coming?), I think my voracious reader can be placated with the new series.

As their sexual tension explodes, Meagan’s arrangement with her extortionist becomes more perilous, putting in danger her darkest secrets and the fragile passion between Luke and her. . . .