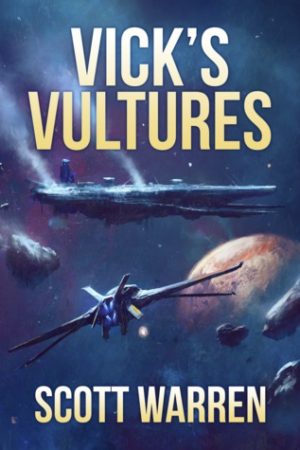 I had some high expectations for Vick’s Vultures after reading the blurb.  It seemed like the scope promised was just too big for 223 pages.  I’m happy to report that relative newcomer Scott Warren rose to the hype.  This is a really good sci-fi read in a market flooded with the paranormal.  It embraces the traditional space opera, but brings fresh ideas to the future Warren has imagined. The writing is not only tight, it is consistent and approachable.  Warren assumes an intelligent reader, not bothering to identify common sci-fi nomenclature like FTL (faster than light) upfront, but writes in such a way that everything makes sense eventually.  He is good at showing us the story rather than telling it.  Blessedly, he stays away from information dumps and like flaws of other sci-fi writers.  Most significantly, it’s plausible—a desperately important factor if you’re going to make Earthlings your heroes.

We love an underdog and Warren plays to that by making Earth the unlikely victors in a galaxy of far superior aliens with empires that span thousands of worlds. Those aliens have been in space for millennia and developed technology we can’t even dream about—which is why Captain Victoria Marin is trying to steal, or “salvage,” as much alien tech as she can and bring it back to Earth for reverse engineering.

Even though Warren is a male author, he’s made his captain a woman.  Kudos.  She is also old enough to wear her authority well without playing into stereotypes of age.  Double kudos. Warren mixes races and genders in the seamless style of Star Trek.  It’s just not a thing.  Thank you for that.  All that authority and experience are called upon when Vick responds to a distress signal, hoping to salvage new tech.  She gets way more than she bargained for in the rescue of First Prince Tavram.  She’s now thrown in the political landscape of the “big three” alien races who consider the “lesser empires” to be beneath their notice.  Before the end of the book, at least one of these races will acknowledge the lesser human race. 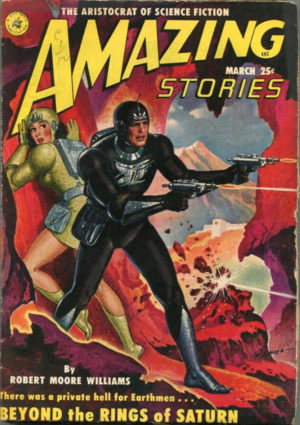 With superior tech, the aliens have also forgotten basic hand to hand combat skills and ground warfare. Privateers like Captain Vick are backed by military personnel. Warren uses his own military background to give Vick’s crew authenticity.  Working to Earth’s advantage, the aliens have their own stories of the Boogie man, “ghosts that walk between the stars.”  Because humans still have space suits and use them, Vick’s crew use their stealth to play into the fears of the aliens they encounter. By Warren’s descriptions of the suits, younger readers might imagine something that looks like a space ninja or Halo character. There is some really beautiful concept art online.

Warren is an illustrator and I wonder what was in his imagination as he wrote.  My mind went back to early science fiction illustrations like the iconic Amazing Stories covers. Simple, dark, and scary. In the acknowledgements Warren says giving up control over the cover art was the hardest part of publishing Vick’s Vultures. I believe that.

The book’s strength is watching humans overcome incredible odds, take advantage of opportunity, and make noble sacrifices.  My single criticism is that Warren was too repetitive in stating the fact that they were underdogs outright.  We get it.  Let us witness it. That part the author did well.  He didn’t need to continue beating us over the head with his premise. Other than that minor note, I was impressed.  I’m very much looking forward to the next book in the series.

In the far future, alien technology captured by the Union Earth Privateers has fueled Earth’s tenuous expansion from a single planet to a handful of systems across the Orion Spur.

Victoria Marin, captain of the U.E. Condor, and her crew of Vultures have been running dry for months. In danger of losing her command and her credibility if she can’t locate fresh salvage, she locks onto the distress signal of an alien ship in hopes of valuable cargo. What she finds instead is First Prince Tavram, the heir apparent to one of the largest empires in known space. Tavram’s ship has been crippled after narrowly escaping an ambush and his would-be assasin is coming to finish the job.

The Vultures launch a high risk mission to rescue the prince and recover every last scrap of xenotech they can before the hunter catches up to his prey. But there are more dangers than notorious interstellar assassins when it comes to ferrying an alien prince across the stars, and Victoria must contend with dangerous alliances, old grudges, and even her own government if she means to bring her crew home alive. Whether she succeeds or fails, the consequences of her choices will affect the path of all humanity.

One response to “Review: Vick’s Vultures by Scott Warren”